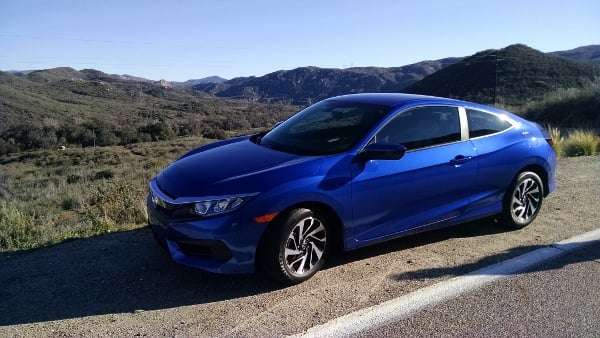 As I caught the late afternoon flight out of San Diego, a delayed realization hit me like a bolt of lightning. The greatest value to be found in Honda’s 2016 Civic Coupe may sit with the LX base trim.
Advertisement

For many buyers, turbo engine power and state of the art CVT transmissions may be the thing that near future legends are made of. And yes, Honda’s 2016 “North American Car of the Year” comes with that option. I’ve driven the Turbo Civic Sedan, read about that adventure here.

However, as an everyday personal conveyance, 10th generation Civic Coupe LX and LX-P presents a very pleasant visual and drive experience. Civic Coupe LX presents great value with little to no compromise. If in fact 2016 Honda Civic Coupe LX comes to market for under $18,500, no other brand offering in the compact segment will come close in standard featured performance and purchase value.

Although one can opt for turbo power, segment leading advanced connectivity, infotainment and safety technology in the reinvented 2016 Civic Coupe Touring, I believe that the greatest purchase value for many buyers of Honda’s 10th generation Civic Coupe, may lie in the base LX trim. Although we’re held to a 3 week drive impression embargo by our friends at Honda, while other journalist experience the Civic Coupe, I’ll point to the strong family ties between 2016 Civic Sedan and Coupe, for a hint at performance and yet to be published specifications, albeit perhaps just a atensy bit “sportier.”

As shared with you earlier from the Los Angeles Auto Show, Civic Coupe’s interior, due to a 1.5 inch wheelbase stretch, and nearly 3.5 inches added to the body length, is larger than past generations, features a lower “hip point’ seating position and subsequently changed driver’s perception of the road.

When viewed in person, the Civic Coupe presents more of a midsize visual when set side by side with the exiting 9th generation Civic Coupe. It's what you don't see that makes 2016 Civic the most dynamic driving experience in Honda compact car history. Also, greater legroom manifests itself in the rear seating area, as well as one of, if not the largest trunk in the compact coupe segment. Civic Coupe also features a 60/40 split rear bench with pass through access from the trunk, sports enthusiasts will appreciated 2016 Civic Coupe’s utility.

I like the not so bare bones 2016 Civic LX for a near back to basics Honda driving experience, with a twist -- the much refined and design uptick 2016 Civic Coupe will hold the highest safety and crash rating in the segment, while presenting greater refinement, style, engine power and ride dynamics.

At 6’ 5” tall, I found myself reaching for the steering wheel

I’ve had to shoehorn my way into the driver’s seat of a few choice rides in the past. It’s that thing we do when trying to convince yourself that the effort of the “tight fit” is worth the drive experience. In the case of 2016 Honda Civic Coupe, there is no compromise or sacrifice.

At 6 ft 5 inches tall, I found myself reaching for the steering wheel, leg, hip and headroom was spacious, seating position, stellar! As stated in this article, I find 2016 Honda Civic’s instrument and control positioning to be perfect. Honda design has further reduced or eliminated claustrophobia inducing rear and side “blind spots.”

As to 2016 Civic Coupe’s base LX trim package, outside of the absence of integrated navigation and Honda Sensing ™ electronic safety suite: As with the base Civic Sedan, horsepower and torque is appreciably increased through the advent of an all new Earth Dreams ™ 2.0 Liter super low emissions 4 cylinder gas engine, and transferred to the road by what many in the industry consider to be the easiest shifting 6 speed manual transmission in the business. I found shifting to be nearly intuitive and effortless.

We found the ‘sweet spot in 3rd,’ and stayed with it

But I’m not allowed to expand on my driving impressions until February 22. I can tell you this, the Coupe has driving dynamic exclusive to the Coupe.

Trust me, you’ll be as impressed by 2016 Civic as I am. it’s a winner. Note: 2016 Civic Coupe MSRP has not been announced as of this posting. However, the powers to be tells us that Civic Coupe pricing and estimated fuel economy should closely follow that of the Sedan.

John NYc wrote on February 7, 2016 - 2:07am Permalink
Thank you for this great write up about the Coupe. Im hoping that the current recall of the Civic sedan wont affect the release date of the Civic coup. I assume that any new Civic Coupes released by Honda will have the engine issue fixed. I believe this car is a game changer, Looking forward to purchasing one soon.
Parks McCants wrote on February 8, 2016 - 5:53pm Permalink
Welcome John. Yes, I just drove the 2016 Civic Coupe in San Diego. While attending the event I spent some one on one time with American Honda head Mr. Jeff Conrad. What we have here with the engine recall is a 2 to 3 week inspection of dealership inventory, prior to sales release. Also, for consumer's possibly effected by the safety measure, a dealership internal scoping of the pin will be conducted to assure its proper placement. No Civic Coupe will be released with this possible flaw. And according to my sources, there will be no delay of model release. Thanks for dropping by.