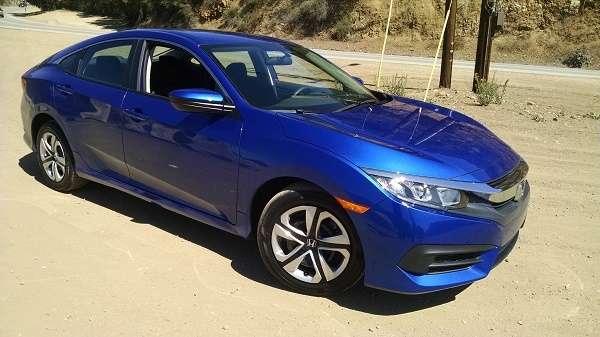 On first viewing 2016 Honda Civic, what you don’t see on the surface is what makes Civic the most dynamic sedan in the compact segment today.
Advertisement

Arguably, 2015 Honda Civic is a high quality, decent ride and drive experience with a proven track record of long-lasting, trouble free ownership. So, if it’s not broken, why change it? The primary reason is this: There’s much competition in the compact car segment with entry-level economy cars getting better every year.

While the battle for top sales ranking continues between Toyota and Honda, Chevrolet, Ford, Dodge, and Korean upstart Kia present affordable, standard-feature-rich subcompact and compact cars to North American buyers that often come to market with a lower price point than Honda Civic.

For 2016, Honda sets a new benchmark in the segment with the introduction of an European inspired Civic Sedan and Coupe.The 5-door English built hatchback and most certainly an Si variant should follow in the 3rd quarter of 2016. The Civic Type R, don’t hold your breath.

Sourced and manufactured in North America

The mostly parts sourced and manufactured in North America Civic has been upsized in recent years, and is no longer the least expensive car in the Honda Lineup, much less the compact segment.

So, the 10th generation 2016 Honda Civic Sedan and Coupe, even on the low end, comes to market with a full compliment of standard features reserved in the past for premium trim levels. You’ll find full Civic specifications here.

On my initial introduction of 2016 Honda Civic last summer in Malibu California, I shared my test mule with a younger journalist of the “Y” generation. While I was impressed by the newfound engine torque presented through the turbocharged Honda Civic Touring, my young counterpart felt more at home in the normally aspirated 2.0 Liter EarthDreams ™ , 6 speed manual transmission driven 2016 Civic LX. Preferring the cloth finished interior, and overall “feel” of the entry-level $18,640 + basic Civic, to the leather clad refined confines of the 2016 Honda Civic Touring, (msrp $26,500+) arguably the most refined and dynamic driving Civic in the brand's history, Matt expounded that “Honda would sell as many basic Civics as they could manufacture.” Matt, a man of few words and many photographs, made a viable point. 2016 Civic LX is far from stripped as to standard features, is fun to drive, rides and handles better than any factory specified past generation Civic.

If I was to park all 2016 Honda Civic variants side by side, on first look, one would have a difficult time discerning the entry level Civic LX from the top of the line Civic. Sure, the basic Civic LX manual sports wheel covers, cloth seats and doesn't come with a dash mounted navigation system.

What you don’t see 2016 Civic’s frame torsional rigidity is improved by 25 percent, aided in part by more intensive use of ultra-high-strength steel. This helps preserve the passenger cage while deflecting crash impact. Furthermore, greater frame rigidity results in improved road handling, and quieter interior for Civic. For 2016, Civic is lighter, 3 inches longer, 1.5 inches wider and 1.5 inches lower to the ground, resulting in a wider, lower visual stance.

The driver will note a lower seating position, resulting in a greater sense of control and unobstructed forward vision. Handling dynamic is greatly improved with ‘tire bounce’ and exterior road noise transference lessened through the reduction of ‘unsprung weight’ in the brake, swingarm, and wheel assembly. Honda also tells us that great effort has gone into advancing reactive damping and vibration elimination.