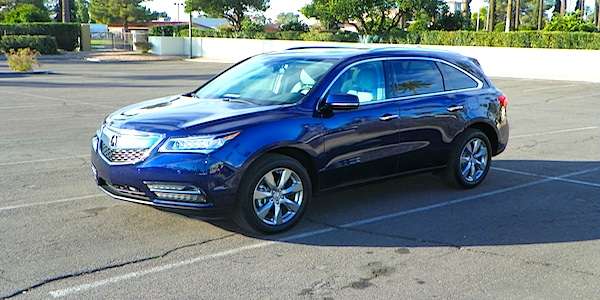 There’s nothing like a long road trip to really get to know a vehicle. Acura’s best selling premium SUV retains interior comfort and car-like performance while preserving just enough truck-like attributes to instill confidence in the driver. We take 2015 Acura MDX down to Phoenix, Arizona.
Advertisement

This week Torque News swings down to Phoenix, Arizona, in Acura’s 2015 MDX premium SUV. There's something to be said for traveling through life in style.

We’d driven SUVs for years and had little initial interest in driving Acura’s offering. We knew one thing for sure about MDX; it wasn’t a Chevrolet Suburban knock off, and didn’t drive or look like a truck while consuming copious amounts of gasoline. We’d experienced SH-AWD technology in Acura’s RLX, TLX and earlier MDX offerings. How would these systems powered by Acura’s iconic 290 horsepower V6 perform in the latest generation MDX?

On first look while handsome, MDX shares a handful of common styling cues with the competition. Audi, BMW and even Ford Edge comes to mind when looking at MDX from the side. And yet, Acura MDX stands out from the crowd with an exceptional color pallet, just enough bling, car ride characteristics and the best fuel economy in the premium midsize SUV segment.

MDX’s best in segment fuel economy can be attributed to several factors, not the least significant being a very slippery aerodynamic body line, right down to the grill design. And then there’s the “bang for the buck.” Dollar for dollar, no one in the automotive industry can touch MDX quality and performance for under $45,000.

There’s way too much information to cover here in one article. So, this blip on your screen will be one of many, as we attempt to capture the essence of MDX in word; Not an easy task for an SUV offering this much exceptional standard equipment and built-in future forward comfort, performance and safety.

MDX is one of, if not the most avandanced premium SUVs on the road today. In-fact, for us, Acura could back the tech off a bit. MDX would still be an exceptional purchase or lease value in a world of $70,000 premium SUVs.

Exceptional comfort standard across the line-up

Once we move past the Fathom Blue Metallic exterior(stunning)on Graystone leather interior color combination of our subject, we stand in collective awe with appreciation of the premium interior accommodations afforded to us by MDX. Everything within view shot is ergonomically correct in balance of placement and composition. No shortcuts or compromise is evident in the construction of MDX.

Our MDX test mule is the top of the line 2015 V6 SH-AWD(super handling all wheel drive) with Advance(tech package) and rear cabin entertainment. The cabin is exceptionally well appointed. Trimmed in high grade perforated leather, premium textured hard and soft surfaces, brushed metals and faux grained dashboard and door/arm rest detail, this SUV is reminiscent of some of the finest Asian and European car interiors in the business. And yet, MDX like all Acura offerings is built in North America. The headliner to A pillar interface is well executed, as is the carpeting, rear cargo area and 3rd row seat backs.

Premium acomodations with a view

As one enters the environ of MDX easing into arguably the best pilot seat in the business, the driver becomes one with the car. Acura puts it this way: MDX design and engineering is ”Inspired by the standards of mankind.” While that’s a bit of a heady statement, sitting in a seat that fits as well as a $1,000 Italian loafer, all of one’s predisposed views of what MDX is or is not melts to the level of wonderment experienced by a teenager on his or her first car drive.

2015 Acura MDX is like no other SUV on the road today: MDX is the best selling premium SUV in North America for several reasons. But for us, and the guy down the street that seemingly drives whatever he or she wants to, MDX is in-fact the very successful reinvention of a decades old concept, Acura style.