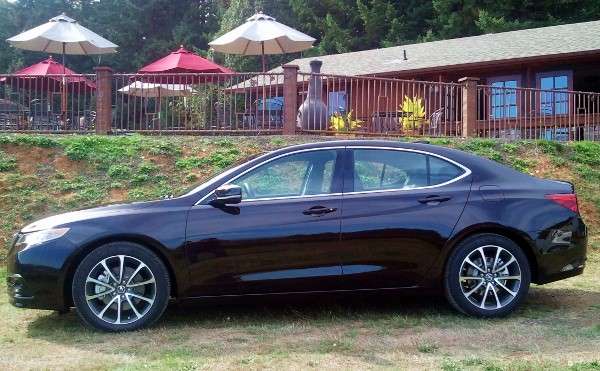 The first time 2015 Acura TLX takes control of the steering wheel and decelerates while applying the brakes, unassisted by you the driver you’ll realize that you're driving the safest, most advanced car on the road today.” Beam me up Scotty.”
Advertisement

Acura’s 2015 TLX may be the safest car on the road today.

Granted, just like you, I’m one of those driver’s that prefers to take control of my own destiny. On first drive I was a bit taken aback by Acura’s road sensing,‘Collision Mitigation Braking’ and pedestrian recognition capabilities; I turned it off!

No, 2015 TLX will not drive itself yet, but comes very close

Through the combination of a lower nose cowling, mirror integrated camera and radar, once on the road and driving at speed down the highway, Acura TLX LaneWatch ™ will recognize the reflective road margins and keep the vehicle centered- to- lane, once set. Veer to off- center lane and TLX will give your shoulder harness a slight tug and shake the steering wheel(slightly).

Imitate falling to sleep as I did,(not recommended) Acura TLX will go into self preservation mode, take control of the steering wheel while applying the ABS braking system and decelerate. I’m told it will drive you to the safety off the right pull out, I didn’t take my experiment quite that far.

In West Virginia my young co-driver released the steering wheel and allowed TLX to steer itself at 50 mph or so; not recommended!

Forward Collision Warning(FCW) could save your life in heavy Freeway Traffic. I experienced the usefulness of this system while driving RLX in heavy morning San Francisco Bay Area commuter traffic. Keeping it simple: What this system does(as I understand it) through the use of a bumper mounted radar is measure the distance between you and the lead car.

When the distance is shortened, the car in cruise control mode will adjust your following distance with the change in traffic flow(speed). In the case of an abrupt slow-down or unexpected stop of the lead car, Acura TLX will automatically apply the brakes while taking control of the steering wheel, thus avoiding or lessening the impact of collision.

I believe this system or something like it will be utilized in near-future traffic control and “ virtual tow.” i’ll be exploring this working concept at the 2014 Los Angeles Auto Show, Sept 20.