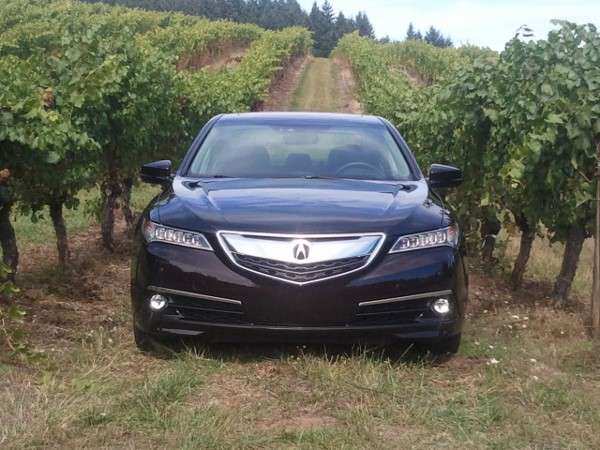 How much horsepower and torque does one need to take the edge off of a workday drive, Is all this techno-wonder dual screen connect-ability wanted by today’s driver?
Advertisement

Day three of our extended 2015 Acura TLX drive through Western Oregon found us collectively scratching our heads as to Acura’s intended market for the top trim $44,000 TLX SH-AWD.

After all, this tri-colored interior wonder was well beyond the financial grasp of most 30 somethings. Yet looking to Acura’s advertising campaign, we note a race through the streets of downtown Los Angeles and a techno, rap, punk onslaught of video shorts pointed at the wallets of the X and Y generation.

Is TLX a BMW knock off in Acura trappings?

Not really, but TLX marketing would have you pulling up to an “M” series and blowing its' doors off at the light; not going to happen. While TLX can be aggressive and edgy, the nuts and bolts of the car originate in the bin marked transformer; sensibility and safety with a dash of exhilaration and sustained driving and riding comfort.

Two cars in one

We found TLX on our latest drive to be two or three cars in one. Thanks to Acura’s state of the art 3.5 liter direct injected, normally aspirated V6 and 9 speed automatic transmission,TLX cruises with the best of the class, while approaching the road performance of a Euro-sport sedan. With a stated 290 hp and 282 lb-ft torque, TLX features impressive power without the aid of turbo or supercharging.

Split personality at the push of a button

It’s where you find the torque that makes the performance difference in today’s high fuel efficient, cylinder managed gasoline engines. TLX comes equiped with an automated drive mode selector. We did most of our driving in normal mode.(4 modes available)

In normal driving mode we found TLX to be a quiet and reasonably responsive entry level luxury sedan with a sporting-twist; coming off of a stoplight was effortless, passing second nature. In normal or economy mode on the freeway you’ll find TLX lugging along at 1500 rpms. This is where the fuel economy comes into play.

Sport and sport +: Paddle shifters anyone?

2015 TLX SH-AWD while equipped with paddle shifters and a state of the art drive mode selector is a bit front end heavy in a tight transitional turn. We had her cranked up over the century mark more than once on the back roads of Lane County. Once you master the accelerator to paddle shifter rhythmbrakes become a secondary accessory. However, TLX SH-AWD is not as agile as TLX 1-4 with PAWS. Our fully equipped tech-sled weighs in at 250+ pounds greater than its nimble brother, you can feel it when cranked up on high performance volume. It’s not an R type nor an Si on the nimble side.

Yeah, it’s fun. for those of us that share cars with our better half( perspective)TLX offers a wonderful compromise of acceptable performance meets safety and Bluetooth connect-ability.

Our vote is still out on Acura’s infotainment system. Will touch on that and the technical side of TLX in our next segment.

Wintermute wrote on October 11, 2014 - 9:12am Permalink
One thing that is important to recognize is that SH-AWD only really comes into play when accelerating, particularly through a turn. The harder and faster you power through a turn, the more active it is. Once you learn to take advantage of that behavior, all of a sudden it doesn't seem nimble, it is like a rocket on rails. Especially with the right tires, and it is universally recognized that to get the "touring" feel Acura puts squishy high-profile tires on there that are like putting Air Jordans on a competitive skier. Put some nice Michelin Pilot Sports on there and then you will see nimble. ;-)