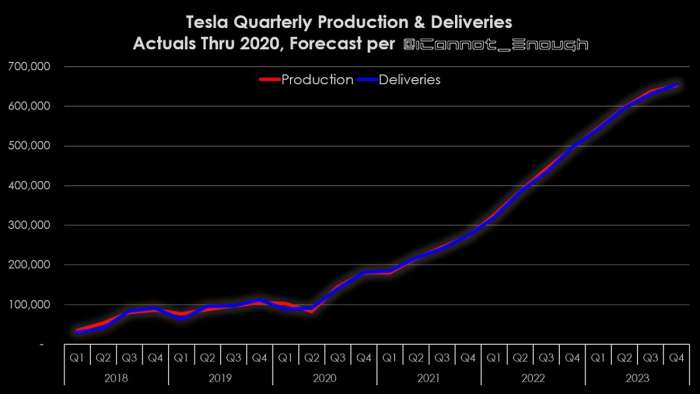 Will Tesla Continue To Grow?

Tesla delivered over 201,000 vehicles last quarter, another record quarter. But can Tesla continue to grow and have record delivery quarters? Let's find out!
Advertisement

Tesla recently reported delivery and production numbers in another record quarter. Will Tesla be able to keep up this growth in the future?

Recently, the Twitter user, James Stephenson, posted 69 Tweets in the most detailed analysis of Tesla I've ever seen. Let's take a look at Tweet #5 of these which focuses on Tesla's production and delivery numbers over each quarter and year - with Q2-Q4, 2021 as projections. Here are the details!

Here is Tweet #4, which focused on Tesla's Model 3 and Model Y global deliveries, quarter by quarter, year over year.

Will Tesla Continue Its Growth Story?

Here's a chart showing the quarterly trend over time in Production vs. Deliveries, including my forecast through 2023:
/5 pic.twitter.com/pSNFSYNMFn

As we can see in the above chart, James is forecasting Tesla to continue to grow at a rapid rate, reaching almost 700,000 quarterly deliveries by 2023. This is over 3 times the quarterly delivery and production numbers Tesla has right now. Will Tesla be able to achieve this in just over two years?

Two important factors for Tesla to continue its rapid growth will be having Giga Berlin (which I think is ahead of schedule) and Giga Texas come online and start producing the Model Y and the CyberTruck.

There are recent reports that Tesla is going to start expanding in India. India is a similar population to China and a very important market for Tesla to eventually reach. I believe Tesla will make a "Model 1" car, which will cost roughly $15,000 to release in India, along with a bus that will be able to act as a robotaxi and be cost effective for the population there.

No Shortage of Work to Be Done

Tesla is in its early growth still, despite a large run up in stock price over the last year. Tesla needs to get its new Giga factories online, start producing and delivering vehicles there, expand on its existing Giga factories, produce a more affordable Model 3 (the Model 2), create a van, create a more affordable Model 2 (the Model 1), and create a bus to serve mass transportation needs in poorer countries. Phew - that's a lot of work. Oh yes, I forgot the Tesla Roadster and Tesla Semi - those are in the works too!

I think James is close with his numbers and that Tesla's deliveries and production numbers will be very close together for many years to come.

What do you think about Tesla's growth - is it done? Or is Tesla just getting started?