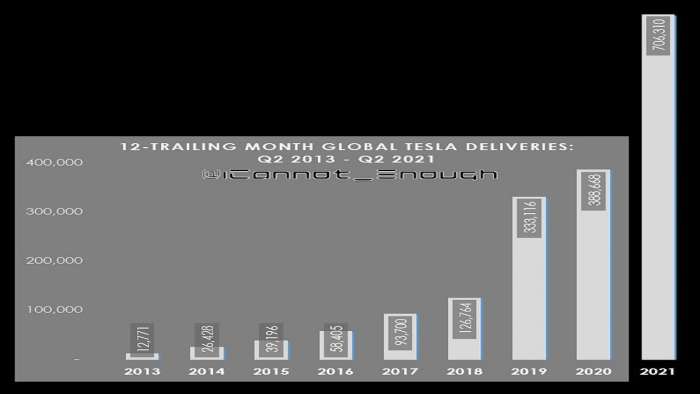 We have Tesla's delivery numbers in for Q2, 2021, and they are just ahead of analyst expectations. Let's take a look at the numbers!
Advertisement

Congrats Tesla Team on over 200,000 car built & delivered in Q2, despite many challenges!!

Tesla grew over 100% from the prior quarter (Q2, 2020), due to last year having a pandemic with a delivery of 201,250. But Tesla has also expanded its manufacturing, improving many aspects of it, including using large die casting machines to make their cars similar to toy cars. This is just the beginning of improvements that will continue to come for Tesla.

For Tesla to keep having more record quarters, they will need to keep improving manufacturing, get Giga Berlin and Giga Austin (TX) online and running, expand on all its Giga factories, and make sure they have no shortages of parts, chips, etc...

To put Tesla's record delivery quarter in perspective, let's look at the history of Tesla deliveries in Q2 each year to the past when there were no deliveries. The growth is accelerating:

It's very clear that Tesla is growing fast and that from 2019-2020 the growth was halted in large part due to the pandemic and things being shut down. I predicted 209,000 vehicles, which was 4.6% off. I'll do another prediction when Q3 comes around.

I'm confident that the Model Y will be a big part of Tesla's growth in the coming quarters. It currently is Tesla's most in demand vehicle and Model Y growth is accelerating quarter by quarter.

Tesla continues to have record breaking quarters and doesn't seem to show any signs of slowing. Will there be a quarter in the future that Tesla doesn't show growth from the prior year? When will that be?