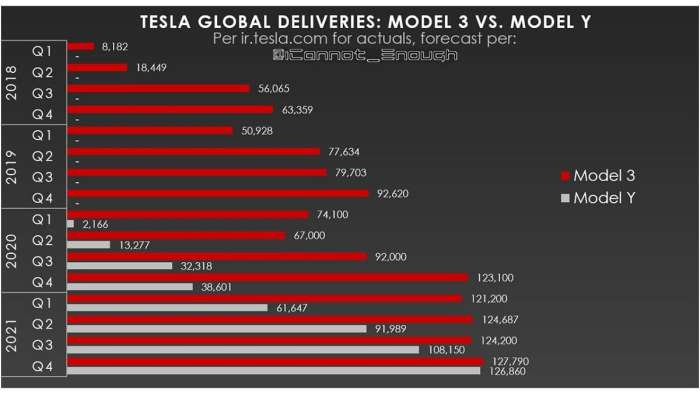 Tesla Model 3 and Model Y Growth and Deliveries by Quarter

Recently, the Twitter user, James Stephenson, posted 69 Tweets in the most detailed analysis of Tesla I've ever seen. Let's take a look at Tweet #4 of these which focuses on the Model 3 and Model Y deliveries over each quarter and year - with Q2-Q4, 2021 as projections. Here are the details!
Advertisement

Here's a chart showing global deliveries of Tesla's 2 top-selling vehicles (2 of the Top 3 selling premium vehicles in the U.S.).

I'm not forecasting much Model 3 sales growth compared to Model Y-- which should grow significantly this year with the ramp in China.
/4 pic.twitter.com/Y7MFP98it2

Here is Tweet #3, which focused on Tesla's overall deliveries of vehicles, quarter by quarter, year over year.

If Tesla is able to somehow keep up that pace of growth, in Q1 of 2024, there would be nearly 1.8 million Model 3 vehicles sold and delivered. I'm not sure if Tesla will invest that much in the Model 3, but I definitely believe in their ability to improve manufacturing and to find efficient ways to produce vehicles better than they do now.

Were Tesla able to keep up that pace of growth, In Q1 of 2022, there would be about 1.75 million Model Y vehicles sold and delivered. I'm not sure Tesla is going to be able to ramp that much in 1 year, but knowing Elon Musk, anything is possible. Instead, I would predict that Q1, 2022 would see around 150,000 Model Y vehicles delivered.

Which Vehicle Will Sell More Over Time?

Once Tesla creates its "Model 2", and if it finds a very efficient way to manufacture that, I believe that Model 2 will see an even greater multiple over the course of a year than the Model Y, perhaps a 100 times increase!

It's clear the Model 3 and Model Y will continue to sell as the future goes on, but which one will sell more? Will it be the Model 3 or Model Y? Will the forecasts James put for Q2-Q4 of 2021 end happening as predicted?