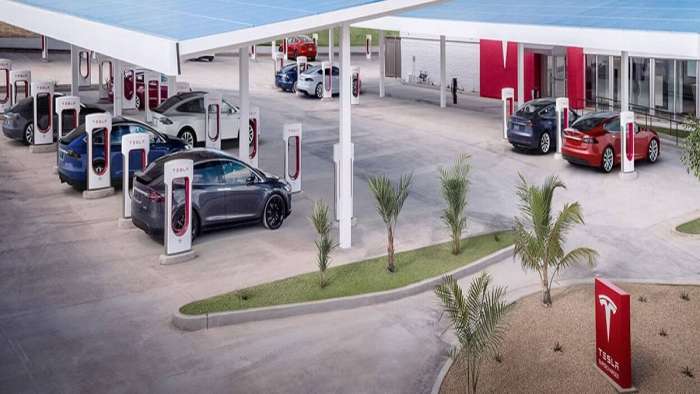 Tesla Boosting its Superchargers by 17%

There is recent news of a Tweet from Elon Musk about Tesla Superchargers and that they are being upgraded to 300 kW from 250 kW. That's an increase of about 17%. Let's see what the implications are!
Advertisement

Not bad, although new Model S has more range & faster charging. 3 & Y should use long range version, as Performance version is meant for max speed & handling, not max range.

Supercharger network is being upgraded to 250kW to 300kW, so that will help too.

The rest of the competition lagged far behind:

Tesla didn't just win this race, it crushed the "competition"

What this upgrade means for the Supercharger Network

In optimal charging conditions, Tesla has estimated that a full charge stop for a v3 supercharger would take about 15 minutes. If you increase this by the 17% improvement from 250 kWh to 300 kWh, you get just under 13 minutes. The question is, how long does it take to fill up a tank of gas? For my current car, a Honda Fit, 2008, it takes less than 5 minutes. When a full charge on a supercharger takes 5 minutes or less, we are going to have parity speed for "filling up" a car.

In order for Tesla to get to a 5 minute charge from the current approximately 15 minutes, it would have to increase by 66%. With that percent increase, Tesla would have to get to 415 kW on its charging stations. This is definitely doable in the next 10 years, maybe the next 5 even. Time will tell. But this is one of the key benchmarks for EV's to be widely adopted and for the gas car to be completely outdone.

What do you think about this upgrade to the SuperCharger network? How long will it take Tesla to get to 415 kW and a 5 minute charge? Will range increase in the future, making it still take longer to charge?

DeanMcManis wrote on July 17, 2021 - 9:19pm Permalink
It is a nice perk, but I think that most EV owners don't use Supercharging every day, and they just charge up overnight or once a week at home. As opposed to EV owners who can easily charge up at home, people cannot refill their gas tanks at home. So the refill ease and convenience is actually a win for EV owners who can simply charge up overnight at home. Without having to spend the time driving to a service station regularly and pumping gas. But for those Tesla owners who have the newer models that can take advantage of the new Superchargers, they will enjoy the faster charging capability.