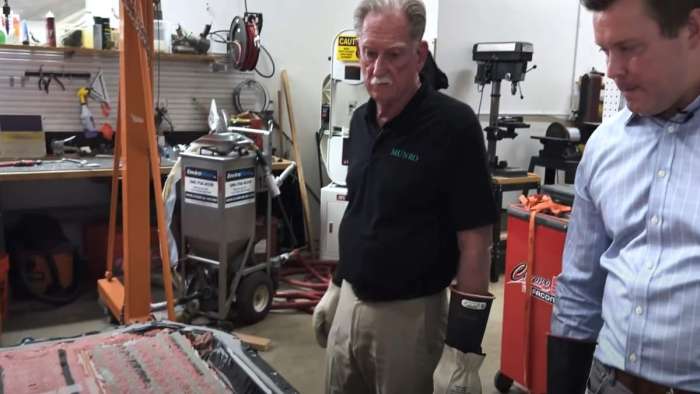 Sandy Munro has been tearing down the Tesla 4680 battery pack and is dazzled, saying he has seen nothing like this ever before and that Tesla has no limit in its ability to innovate.
Advertisement

Sandy Munro has been looking at Tesla's 4680 batteries and is dazzled by the technology. It looks differently than anything he's ever seen. He's wondering if these batteries are even coming from the same company. There's no limit on their capacity to invent.

There is a barrier in between modules that looks like a fiber glass like material that could be a thermal runway mitigation for if you had something going wrong, it would keep that problem from propagating all throughout the battery.

The pink foam on the battery pack is a mystery to everyone (not at Tesla) so far - perhaps it's also a thermal mitigator. In the unlikely event that the pack catches fire, only that segment is likely to burn. Tesla's #1 priority in all of its products is safety.

What will happen when Sandy tears down vehicles from other companies and legacy auto manufacturers? Will he say things look different? Will he be dazzled? My guess is he will not be.

To Sandy, it seems like Tesla has no limit on their capacity to invent. Tesla's culture of innovation is driven my Elon Musk who says that everyone must innovate or they will be asked to leave the company.

How will things look as the years go by - and the decades? Will Tesla's technology truly be alien-like compared to all of its competitors?

Sandy says there are 3 things that drive poor quality. The first is fasteners like screws and rivets. When he was working for Ford, they did a big study and he and his team found that 75% of all catastrophes were attributed to fasteners. Tesla's battery does not have fasteners to it.

Tesla continues to innovate and lead all other auto companies when it comes to technology, innovation, and software. I'm excited to see the 4680 batteries reach volume production. What do you think of Tesla's technology and 4680 batteries? Is Tesla the most innovative company in the world?