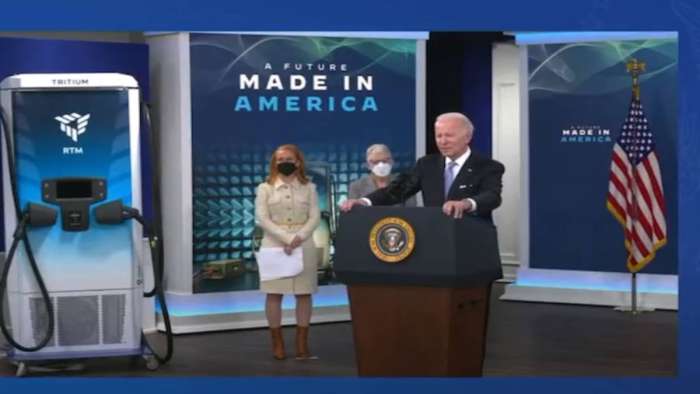 President Biden Acknowledges Tesla For the First Time Ever

We have a video of President Biden mentioning Tesla for the very first time ever. He gives credit to Tesla as the largest EV manufacturer in the U.S.
Advertisement

President Biden Acknowledges Tesla For the First Time Ever

One of the most exciting news for Tesla in quite some time was President Biden talking about how America has been investing in EV manufacturing. He stated that companies have invested over $200 billion in domestic spending for manufacturing for clean energy in the U.S. He recognized Tesla as America's largest EV manufacturer.

Thankfully, the UAW hasn't fought back against President Biden because of his mentioning of Tesla. Tesla being mentioned is something that should happen naturally. Tesla is the biggest EV manufacturer - period. Even though Biden read this statement off a teleprompter most likely, it's still the right thing to do.

It's good to see this happen - something similar happened with Missy Cummings and NHTSA when she had a conflict of interest with other autonomous companies and passing judgment against Tesla while in that situation wouldn't be fair.

This is a small win for Tesla and it's nice to at least get a mention from President Biden. My guess is that we'll still see the majority of lip service and communication directed at GM and Ford, but stating the truth is a nice, if albeit small, step in the right direction.

There was also a petition created with over 55,000 people signing it, for President Biden to acknowledge Tesla as the world's leading EV manufacturer.

Petition: President Biden Please Acknowledge Tesla's EV Leadership - Sign the Petition! Thanks y’all - I know how much you support @Tesla and ⁦@elonmusk⁩ https://t.co/amA1IALBi9

If you look over at the petition, you can see that the petition is asking for President Biden to acknowledge Tesla's leadership in regards to electric vehicles. The petition states that the Biden Administration and the White House have purposefully been ignoring Tesla's hard work while propping GM and others as "EV Leaders."

The petition is written with the belief that the reason for snubbing Tesla is on behalf of the UAW (United Auto Workers) - a union of workers within several American car companies and that the reason was due to UAW pressure.

There was even an interview about meetings with the UAW and President Biden about why Tesla wasn't present. These interviews never directly mentioned Tesla or any reason why Tesla wasn't invited, but always focused on the companies involved in the discussions.

The petition shares that it is an insult to respond this way and with President Biden's insistence that GM is leading the world in electric vehicle - when the produced just 26 in Q4, 2021, is a slap in the face of any reasonable person and is pure manipulation.

I think that this petition is partly why President Biden mentioned Tesla. But here's the real reason:

@POTUS acknowledges Tesla as leading EV manufacturer in the U.S. This was inevitable - the president is incentivized to do this because having Elon Musk fans (over 70 million) a fan of him is advantageous for the next election. Just wonder what took so long... $TSLA @elonmusk

It is all due to incentives - and this is something that Elon Musk has stated repeatedly. People will do what they are incentivized to do. If I have an incentive to work 4 hours a day or 8 hours a day and get paid the same for both, my natural inclination is going to be to work 4 hours a day. This is just the normal nature of humans unless you consciously decide not to do it.

In the case of President Biden, I believe he needs to get on the side of Tesla and the over 70 million Twitter followers that Elon Musk has in order to win the next election. Why wouldn't he talk about Tesla and the great work being done over there? He can do that and also be associated with the UAW, GM, and Ford.

Why do you think President Biden is mentioning Tesla now? Is it because he wants to get more votes in the upcoming election? Or is it because of the petition started by Tesla Twitter?

Tesla Contemplates A New Strategy for China Retail even As Sales Boom
Jay Leno on Elon Musk & EVs: “I Think He Should Get ... Credit"
END_OF_DOCUMENT_TOKEN_TO_BE_REPLACED