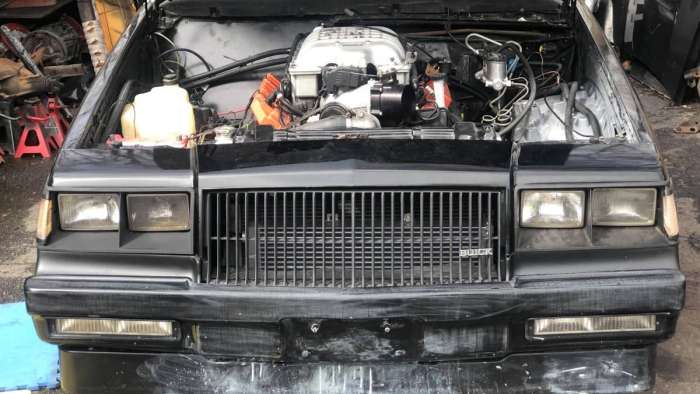 This Buick Grand National is quite a work of automotive art, featuring a supercharged Hellcat Hemi, a Ford differential, Tesla brakes, a variety of Chevrolet parts and a long list of aftermarket upgrades that make this one of the most unique GM G-body cars we have ever seen.
Advertisement

When the Hellcat Hemi was introduced for the 2015 Dodge Challenger and Charger, an automotive legend was born. Since hitting the market, the Hellcat has helped more than 50,000 muscle car owners enjoy more than 700 horsepower in a comfortable daily driver. Of course, the Hellcat Hemi is also the motivating factor in the Jeep Grand Cherokee Trackhawk and it will soon be available under the hood of the Ram 1500 Rebel TRX and the Dodge Durango SRT Hellcat.

It can be argued that the Hellcat Hemi is one of the greatest modern American engines, but it has proven to be popular beyond the dealership world. The supercharged Hemi has become the hottest engine for swap projects, with some folks buying up drivetrains from wrecked cars while others opt for the ease of the Mopar HellCrate crate engine package. Early on, owners of classic Mopar muscle cars were adding Hellcat power, but we have also seen the supercharged Hemi in a Dodge Dakota, several Mazda Miatas, a classic Chevy C10, a Toyota Prius, a Plymouth Prowler and many different Jeep Wranglers and Gladiators. 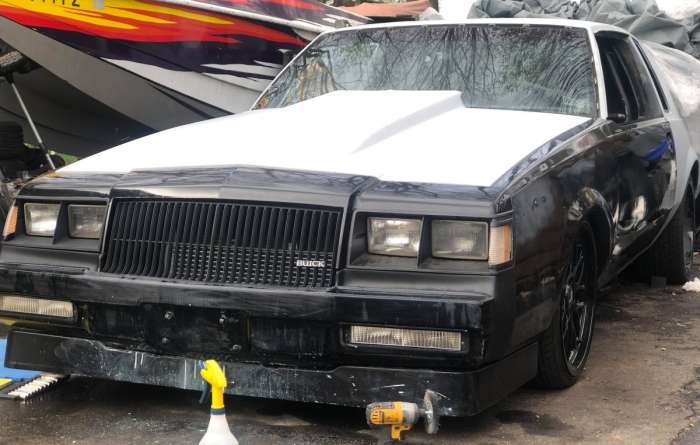 However, the “Hell National” might be one of the most interesting Hellcat swap projects that I have seen, because it started with a high performance model. It makes sense to remove the boring hybrid drive of a Prius or the tiny 4-cylinder of a Miata to make room for a 700+ horsepower Hemi, but Enrique Ojeda chose a Buick Grand National – an actual Grand National, not a Regal - for the basis of his Hellcat swap project car. The result may be hated by folks in both the Mopar and GM camps, but there is no denying that this is one cool 1980s Buick.

We reached out to Ojeda, who provided us with all of the key details on his Hellcat-powered Buick that he calls Hell National. 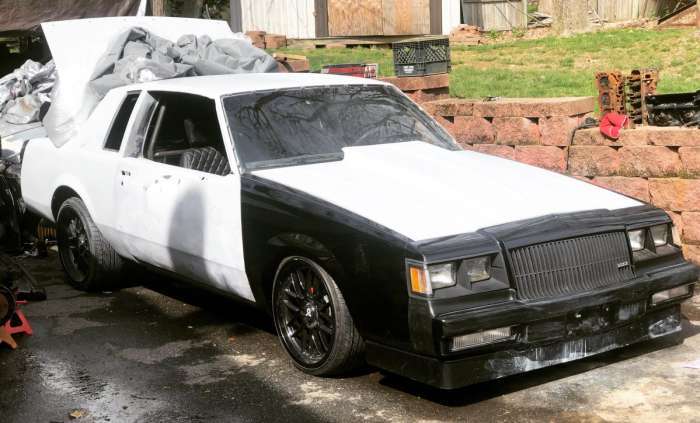 How a Hellcat-powered Buick Came to Be
Ojeda told us that this wasn’t a project that he planned in advance. He found that Buick Grand National rotting away at a farm in the middle of nowhere in Pennsylvania. While it was in rough shape, everything was there and having just sold his 1969 Dodge Charger with a supercharged 440, he took on the challenge of bringing this classic Buick back to life. 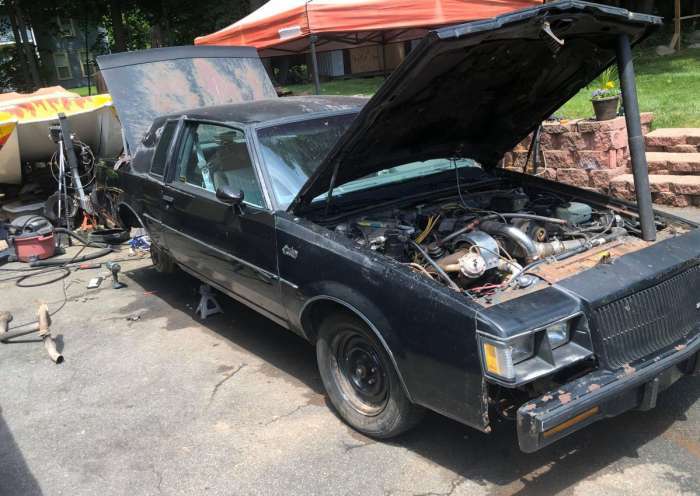 At first, Ojeda planned to clean up the body and get the car back in proper running order with the turbocharged V6, but then he came across a wrecked 2016 Dodge Charger SRT Hellcat. While his friends told him that he was crazy, as he had never attempted such an elaborate project, but that didn’t stop him from buying the Dodge engine and transmission for his Grand National. 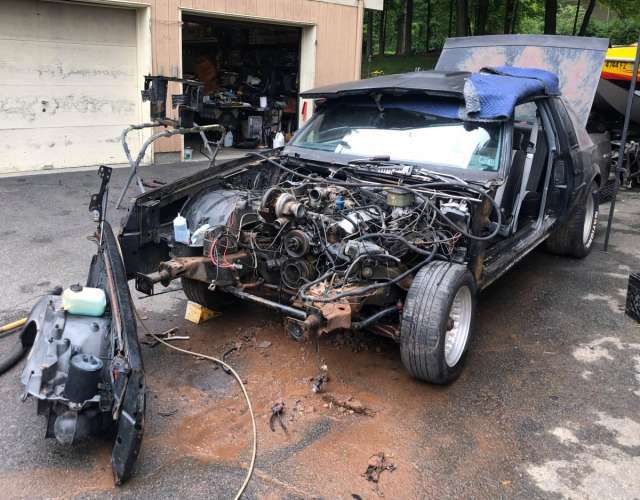 Once he had the engine and transmission, Ojeda began tackling the physical restoration aspect of the project. While the front end was off, he ripped out the Buick V6 and in its place, he installed the 707-horsepower Hellcat Hemi. Of course, making a 2016 Dodge V8 fit and function in a 1980s Buick was far from a plug-and-play project, requiring many custom components, including a standalone engine management system. He also reinforced the chassis, added an array of custom suspension components and to make the most of that power, the rear end was tubbed to accommodate wider tires, with a beefy Ford 9-inch rear end putting the power to the ground. 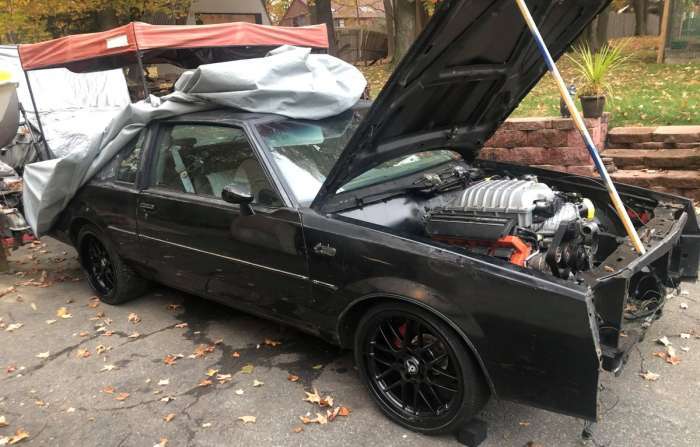 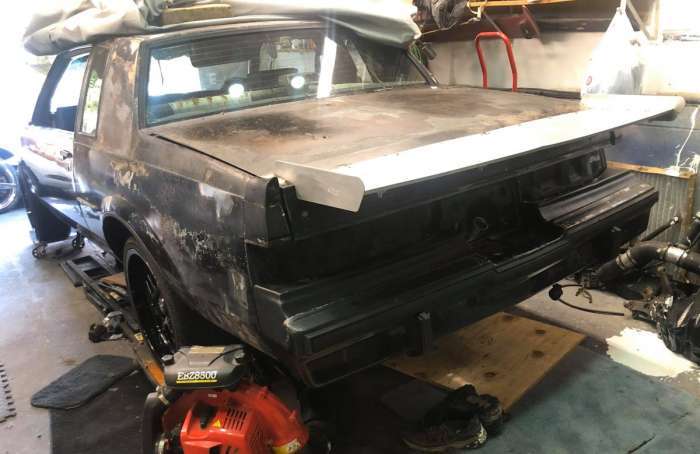 The Full Details
Just having a Buick Grand National with a Dodge Hellcat Hemi would have made this car unique enough, but there are other interesting aspects of the build. It has front brake rotors from a Camaro SS and the entire rear braking assembly is from a Tesla Model S. The engine is held in place by motor mounts for a Chevy LS engine. It has wheels from a BMW.

Here is a list of the key components that brought the Buick Hell National to life. 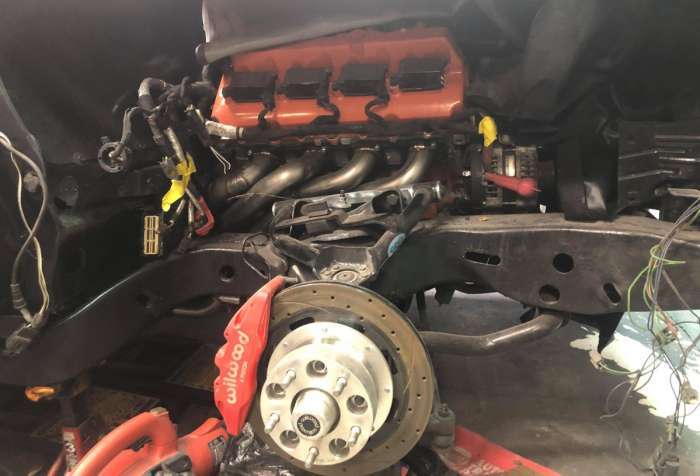 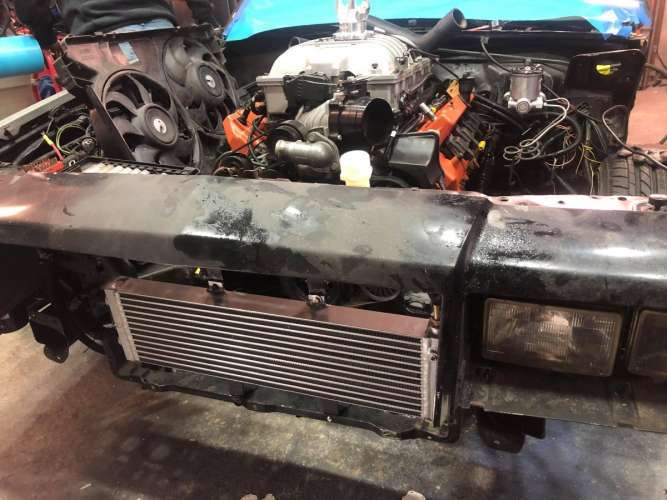 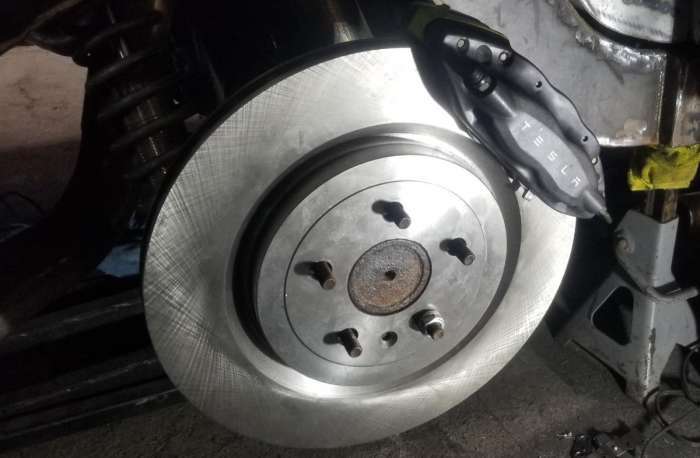 Ojeda and his friend Lenny Nguyen built this car on our backs in a two-car garage over the course of six months. When we asked Ojeda if there was a certain aspect of the project that was particularly challenging, he explained that this was his first attempt at a swap like this. He went on to say that “the whole build was a challenge and a learning experience that I would do again without a doubt”, going on to say that he hopes that his project encourages others to go wild with their own unique builds.

Below, we have included three videos. Two are walk-arounds that show the car from different angles inside and out while the third allows us to hear the supercharged Hemi idling in the Buick Grand National.

Nearly Complete
As we publish this piece, the Hellcat-powered Buick Grand National project isn’t quite complete. This week, Ojeda is working on the custom center console. 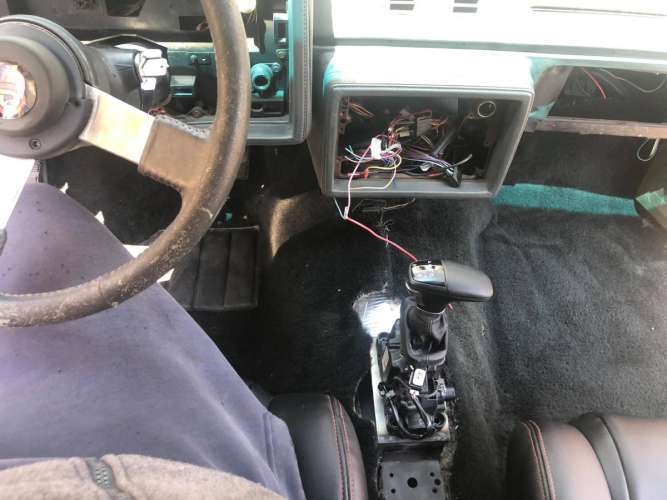 He is also waiting on the digital gauges, but once those are installed and working, it will be time to tune the engine. At that point, it will be ready to tear up the street and turn lots of heads at car shows. Some people will hate it, as it combines a legendary engine from one brand with a legendary car from another, but as one of the most unique Hellcat swaps we have seen, Ojeda’s Buick Hell National is sure to wow the crowds.