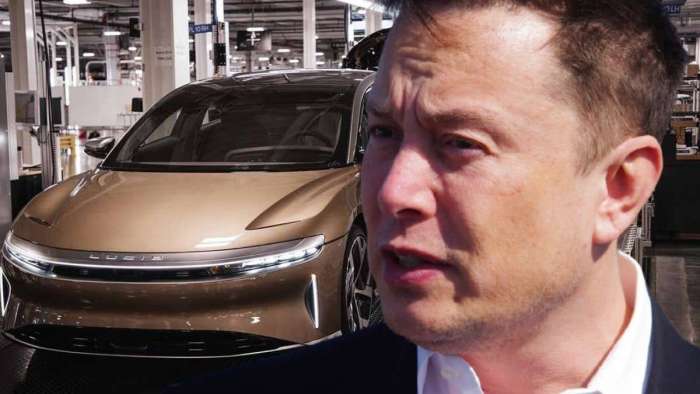 Elon Musk attacks Lucid Motors again. Why is $LCID only 5% of $TSLA Market Capitalization? Is Lucid the Tesla Killer?
Advertisement

Elon Musk has yet again taken a shot at Lucid Motors. He has previously done this regarding Lucid Motors CEO and CTO Peter Rawlinsons contributions with the Tesla Model S, stating that,
“Rawlinson was never chief engineer. He arrived after the Model S prototype was made, left before things got tough & was only ever responsible for body engineering, not powertrain, battery, software, production, or design”. Peter Rawlinson later disagreed with Elon’s claim and said that his title was in fact Chief Engineer of the Model S. So the question now must be asked, why did Elon Musk say that?

Elon Musk has been right before

Elon Musk has never been shy to feud with his Automotive counterparts, when he disputed Nikola Motors and Trevor Milton are frauds. Stating that “Hydrogen Fuel cells = fool sells” and the tech is “Staggeringly dumb”. Elon Musk proved to be correct in his stance against Trevor Milton and Nikola Motors, when short seller Hindenburg stated that they had some staggering evidence that Nikola Motors could be a fraudulent company. After the General Motors deal with Nikola Motors was made public, Hindenburg published a short report. Which stated that Nikola Motors did not have real technology and they pushed their prototype down a hill and recorded it. This ended up being true and many investors lost tons of money believing in Trevor Miltons lies.

What is different about this attack on Lucid Motors

So why is Elon Musk now attacking Peter Rawlinson. Lucid Motors technology is obviously real, they have broken EPA range records and won Motor Trend Car of the Year in 2022. Lucid Motors is now delivering vehicles to customers and a major expansion is now happening in 2022 and beyond.

Is Elon Musk worried about Lucid Motors potential and now attacking the company that is trying to build a brand to compete against Tesla? Could Lucid Motors truly be the Tesla Killer?

Not to say Lucid will ever run Tesla out of business, but Lucid could dethrone Tesla as the top electric vehicle player in the game. Once Elon Musk leaves Tesla to go to SpaceX and work on his mission to Mars, could Lucid Group actually overtake Tesla?

The reason that I am bringing this up is because Lucid Motors could end up overtaking Tesla because of their state of the art and industry leading technology. If this does indeed happen, investors that buy the dip under $30 will almost certainly see a 10-20x return on investment. Right now, Tesla is valued 20x higher than Lucid Motors. Lucid Motors is 5% of Tesla's entire market cap. Since that is the case, why would Elon Musk even bother insulting or taking the time out of his day to respond to a twitter post like this one:

Tesla has great respect for software engineering, they do not

Elon is clearly taking a shot at Lucid Motors engineers for not implementing DreamDrive and Cruise Control in the LucidAir Dream Editions. Many investors and twitter users were quick to remind Elon that his Full Self Driving does not work and has caused many Tesla owners to pay thousands of dollars waiting for promises on a system that does not work as advertised. I even tweeted a video about the FSD issues on my twitter account. You can see that here:

I am a huge fan of Elon Musk. I own a Tesla Model 3 and that car has made me fall in love with electric vehicles. I am still confused on why Elon Musk has continued to take shots at Lucid Motors if they did not pose a real threat to take some of Tesla's market share. He has also stated that Peter Rawlinson was not the Chief Engineer of the Model S, which is untrue.

I believe that Lucid Motors Technology does put fear in Elon Musk's eyes, but this is a long battle between the two companies. Elon has also mentioned that competition is great for the electric vehicle industry. I am aware I will be blasted for writing this, but Lucid Motors is a real threat to Tesla and anytime the two are involved in the same discussion, only further deepens the rivalry.