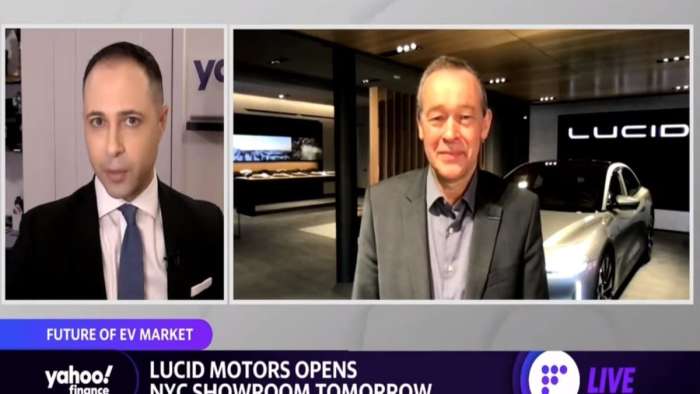 In a recent interview with Lucid Motors CEO, Peter Rawlinson, we learned that he believes electric vehicles are a technology race and that Tesla is in the lead and that he aims to make this a two horse race. Let's dive in some more.
Advertisement

Peter Rawlinson mentioned that their total reservations with a deposit of money (some up to $7,000) have surpassed 10,000. He mentions that there isn't a market just for electric vehicles, there is a market for cars. He says that the adoptions of electric vehicles is great for the planet.

He was asked a question if reservations have started to increase faster with more show rooms being opened. There are 8 studios opened. Peter believes that as people experience the Lucid Air vehicle, that orders will continue to accelerate. Peter wants to accelerate the growth of Lucid.

Tesla is on track to surpass what I believe is 200,000 deliveries of vehicles in Q2, 2021. Not just reservations, but actual deliveries of its cars.

The world needs to accelerate its transition to sustainable mobility

Peter Rawlinson said, "The world needs to accelerate its transition to sustainable mobility." This is the exact same mission Tesla has except there is a one word difference. Peter said "mobility" instead of "energy". I don't think this was an accident. He wants to model what Tesla is doing to be successful, but say it in a way that is unique to Lucid Motors.

Peter was asked about a timeline to get their cars, which is in line with his statement to accelerate the world to sustainable mobility. He was also asked if the chip shortage is affecting them.

Peter said they are on track for deliveries for the second half of 2021. On June 18, they started their quality control builds of their vehicles and when the quality is right, that's when they can sell to customers.

He's confident that his engineering and procurement teams have this covered.

Tesla is far ahead of Lucid Motors currently. It will be interesting to see if the Lucid Air measures up to the Tesla Model S Plaid.

Focusing on a 10 year plan

He was asked if the market is too optimistic on his company given his company won't produce many vehicles this year. Peter responded that Lucid has world class technology that will have a transformative impact on the world's transition to sustainable mobility.

I think this answer from Peter is actually a good one. Many people have short term visions of things and in order for Lucid Motors to succeed, it has to think 10 years or more ahead. That's how Tesla became successful. That's how level 5 full self-driving will happen - by having a long-term vision.

Tesla is the Top Dog

Peter didn't say Tesla was the top dog. He did, however, say that electric vehicles is a technology race and that in this race, and that right now in the technology race, Tesla is the current leader and that is why Tesla commands such a large market cap. Peter aims to make Lucid Motors competitive with Tesla and to make the electric vehicle race a two horse race.

I happen to agree with him that Tesla is the leader in the technology race. Just look at their full vision self-driving technology, the ease of over the air updates, and all the extra features you get when owning a Tesla.

DeanMcManis wrote on July 2, 2021 - 1:41am Permalink
I think that Lucid is right on track for shipping their Dream Air models later this year. For competition, Tesla is obvious, but when I spoke to Mr. Rawlinson last year, he really envisioned his competition to be the top legacy, luxury, performance, automakers like Mercedes, BMW, Jaguar, Porsche and Audi. Mercedes EQS is a prime target for Lucid Motors, as well as all of their similar, gas powered, luxury models.