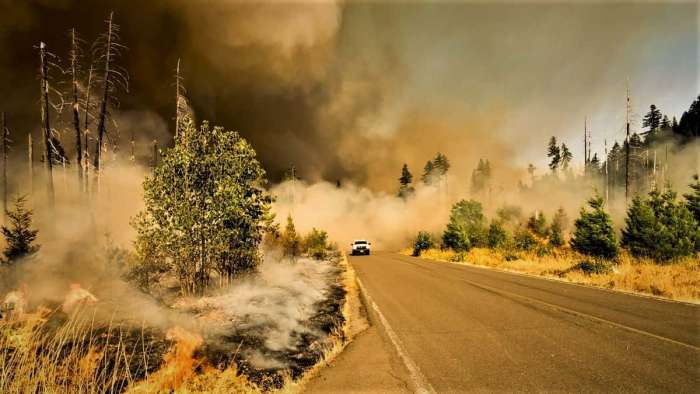 There’s no denying that the quality of the air we breathe affects our health with some seriously more affected than others. One example was this past year’s fires in California where many residents near the fires reported experiencing respiratory distress and other health problems from breathing in toxic smoke for days and weeks during the fires.

In fact, according to the EPA “One of the main components of smoke is particle pollution (PM), which is a regulated air pollutant. Wildland fires, which include wildfires and prescribed fires now account for 40 percent of the total PM emitted in the country, making it a major source of the pollutant, which causes lung and health problems.”

To help Tesla car owners deal with particulate matter from smoke, exhaust, and other pollutants, it like many other car makers install HEPA (high efficiency particulate air) filters to protect drivers and their passengers from breathing in toxic particles.

However, Tesla takes this protection a step further by pressurizing the inside of the car via their BioweaponDefense Mode.

Inspired by air filtration systems used in hospitals, clean rooms and the aerospace industry, Tesla's HEPA filtration removes 99.97% of airborne particulates, such as smoke, bacteria, and pollen. The HEPA filtration system is active whenever climate control is pulling in outside air. For extreme conditions, Bioweapon Defense Mode positively pressurizes your cabin. This prevents pollutants from leaking in as you drive, as all air is filtered through the HEPA and gas media filters. Every new Model Y, S and X comes standard with a HEPA filter and Bioweapon Defense Mode.

So, just how well does this work? As a test demo, a Tesla in Bioweapon Defense Mode was isolated within a large plastic bubble into which smoke grenades were activated releasing a visible cloud of choking gas trapped within the bubble.

Here is a video of the demonstration:

Clearly, the demo was a success with before and after images showing smoke particles trapped by the filters and testimony from within the Tesla stating that the Bioweapon Defense Mode worked protecting the occupant from breathing in the gas grenade contaminants.

“This is filter is 99.97 percent effective…or better against particles of any size,” stated the Tesla vehicle occupant.

For additional articles about Tesla, here are three selected articles proven popular with readers: “An Important Tool all Tesla Owners Should Carry to Revive a Dead Tesla" and “From Lithium Mine to Tesla Battery Line: and "Protecting Your Tesla from Lightning."