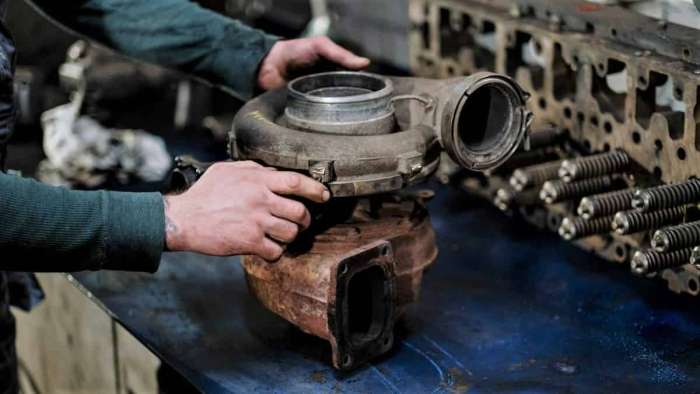 Blown Turbo at Only 60,000 Miles on This Chevy. What Happened?

Used car shoppers, here’s a good example of how a used car will develop a blown turbo problem with an improperly maintained engine. Plus, a demonstration on replacing a turbo in an older used car.
Advertisement

Earlier this week we saw a Consumer Reports rating of the best used older cars for under $10,000 that you can buy right now. The models covered only a few 2012-2013 models of Mazdas, Toyotas, and Nissans. The pricing of which you will find varies significantly depending mostly on their mileage and the dealership.

However, finding a model in fair to good condition might not be so easy, and could have overly inflated pricing in your neighborhood.

Related article: Is Your Dealership a Stealership?

If you are in the market for an older economy car and cannot find one from the listing, you might find yourself tempted to consider something else like a low mileage 2014 Chevrolet Cruze and wondering if this will suit your needs as well.

The short answer is that it could; however, it comes with significant caveats that you should be following regardless of what model of used vehicle you are looking at.

• Do your online homework on older models and find out how they fared on reliability and check their owner history.

• Take the time to do your own used vehicle inspection and asking if any maintenance records are available.

• Always test drive on city streets and on the highway.

• If it passes your muster, then hire a mechanic who has experience with the model to do a thorough inspection and analysis.

The importance of following these caveats cannot be overstated. Especially if you are considering a vehicle like the aforementioned 2014 Chevrolet Cruze that a used car shopper could find tempting because of its low odometer reading.

The problem with this exampled model for used car shoppers is that like many not-so-popular used car models reviewed, they tend to have mediocre reliability ratings based on a few car review sites focused mostly on engine and drivetrain problems. However, you will also find personal testimonies of owners who say their vehicles made it to 100,000 miles with little to no trouble. So, what do you do?

In cases like this, it helps to consider what is the TRUE value of any used car is by following the advice given earlier by this commonsensical mechanic who talks candidly about the best used car you should not buy as well as a series of videos that helps car buyers find the true value of a used car.

The primary point he makes is that regardless of the used car, in most cases a used car is only as good as the person who maintained it.

To hammer in this point, here is a video about a 2014 Chevy Cruise with turbo that despite its low mileage was a problem car because during its 60,000-mile life, it was likely not maintained properly as opposed to being a case of a poorly designed/manufactured unreliable model.

Related article: Guide for Choosing a Four-Cylinder Turbo Over a Typical Six-Cylinder and Vice Versa

Here is an instructive look at a 2014 Chevy Cruze with a 1.4L ECOTEC engine fitted with turbo experiencing classic signs and symptoms of a blown turbo problem. The value of the video is that it shows what can happen to cars fitted with turbo that do not have their engine oil changed frequently enough. Plus, it is a good demonstration of how to replace a turbo on some older model cars.

For additional articles about reliability in used cars, here are two selected pieces to consider:

COMING UP NEXT: The 3 Best Work Cars for Small Car Budgets

DBX wrote on May 17, 2022 - 11:45am Permalink
One thing to beware of is the variation in price on these parts. When my Chevy Sonic turbo was misdiagnosed as failing in fall 2020, I had quotes on the replacement turbo part (the highest end version of the models available) that ranged from as low as $425 to over $1000. Fortunately it turned out to be OK and I never got into the repair. (Prices now have a similarly broad range but about 20 percent higher) The linked video has a mistake. It's not a direct-injection car. Those oil feed lines are a vulnerable part of the system. A bit disturbed to see that clog even on one of the newer models with the heat shield, though understand from the YouTube comments the customer was basically sold a bill of goods on oil changes which would help explain it.