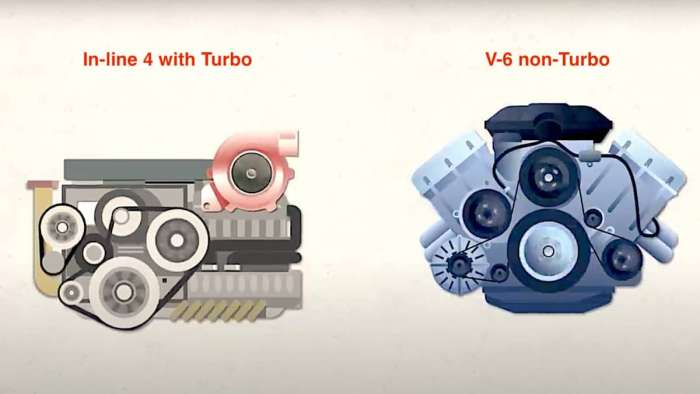 How do turbochargers work? How does an inline four-cylinder turbo engine compare to a naturally aspirating V6 engine? Are turbocharged cars better? What are the pros and cons of having one in your car or truck. The answers to these questions---and more---are available in this must-see video guide that explains all of your turbo-based burning questions.
Advertisement

More Four-Cylinder Turbos on the Market

Earlier, we discussed a recent review of turbocharged engine reliability, plus some recommended models that come packed with turbocharged power. As it turns out, you can’t swing dead catalytic converter by the tailpipe in a car lot these days without hitting a four-cylinder turbocharged vehicle. And there’s a reason for this.

One interesting fact about why increasingly more 4-cylinder turbocharged vehicles are being produced and are outpacing production of typical traditional six-cylinder models is that market experts have found that most customers are not so concerned about cylinder count; but rather, customer focus is more on price, performance and fuel economy. The word has gotten out that an inline four can be a performance vehicle---and still be fuel economical and even cheaper to buy.

Surprising Performance in a Smaller Package

A four-cylinder with comparable or better performance? You betcha, in fact some 4-cylinder cars with turbo attain as much power as a V-8 engine, operating well into the 400+ horsepower range in some luxury sport models.

In addition, you may be surprised to learn just what models of car---and trucks---have made the switch to an in-line four-cylinder engine with a turbo package, which is revealed in the video below.

That said, as a supplement with more detail into the innerworkings of a turbocharger and what it means in the vehicles we buy today, YouTuber Scotty Kilmer in one of his more-relaxed deliveries of very informative need-to-know automotive advice, takes us on a pleasurable and enlightening journey of discovery regarding just about everything you need to know when considering whether or not to buy a model that has a turbocharge option or an already built-in feature.

No One is Telling You the Truth About Turbocharged Cars, So I Have To

For additional articles about car performance where it counts, follow these links to what engine oil you should be using and the value of having your engine oil analyzed.