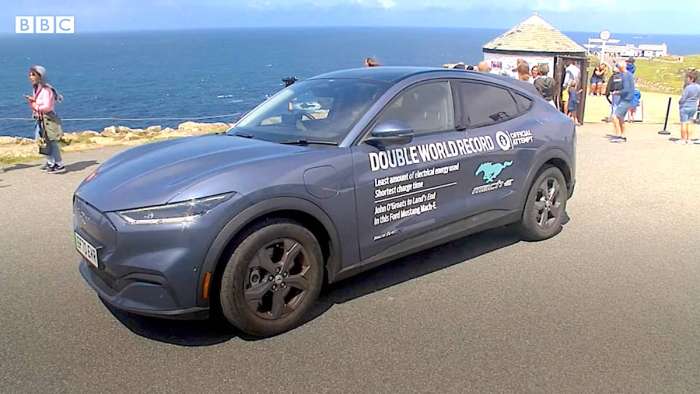 Can EVs really handle a long road trip this summer? A 2021 Ford Mustang Mach-E recently showed that it is possible and set a new energy EV record that qualified the feat for official recognition in Guinness World Records.
Advertisement

One of the primary concerns and selling points of EVs is whether or not the current tech can be counted on to transport car owners beyond their homes to the great outdoors as vacationers take to the roads in a post-COVID respite to return to a semblance of normality while getting out of the house and yet staying a safe from potential COVID exposure.

Today, the makers of Ford are proud to announce that their latest highly popular EV---the 2021 Mustang Mach-E---has just demonstrated that road anxiety will become a thing of the past as a new record over-the-pond demonstrates that EV road trips are possible and improving.

While the driving conditions did not meet typical cross country road trip comfort habits, the team focused on setting a new record using nothing but public chargers along the route with energy saving tactics that included:

And, their efforts paid off with verification of their achievement by the Guinness Book of World Records, that officially recognized the drivers and their Mach-E for its record low EV energy use.

Here is a video of the road trip achievement released courtesy of BBC News:

Plus a YouTube video about the record breaking event scheduled for release later today:

To learn more about the Mustang Mach-E and how it compares to other EVs such as those by Tesla, be sure to take a look at battery similarities and differences between Ford and Tesla, as well as important engineering differences between the two auto makers that showcases EV development and progression as legacy auto-building catches on to non-ICE EV technology.

For even more about another record setting EV, here is one that recently made a claim that indicates it could be significantly out-performing Tesla in distance and charging.

Coming Up Next on Tesla: How to save money when having your Tesla repaired.

DeanMcManis wrote on July 13, 2021 - 12:47pm Permalink
It is definitely an achievement! They were of course hypermiling, but they did manage the run on real roads. Like gas powered vehicles, EVs have their most efficient "sweet spots" in speed and load that can result in uncommon efficiency.
Timothy Boyer wrote on July 14, 2021 - 7:19am Permalink
I agree and I liked that they did it on an actual road as opposed to an oval track with high sides to it---makes the results more believable. Thanks for the input!