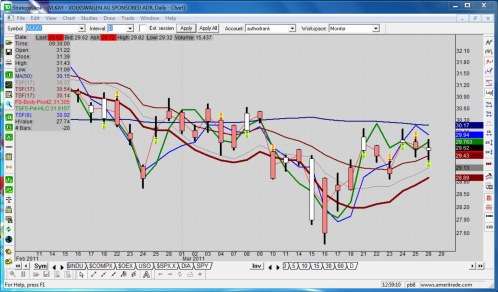 Despite the news from MarketWatch that Volkswagen will recall 71,043 Jettas to fix the wiring for the anti-theft alarm system and horn, VW stock which trades as an ADR in New York under the symbol VLKAY is holding its own.
Advertisement

About 30 minutes after the news, VW was trading at 29.62. While a weekly stock chart shows a sideways pattern since rising from the lows of September 2010, it is also strongly above the 52 week moving average.

It is the daily chart (shown) that tells the immediate story. Although below the 50-day moving average, the stock is trading above the rising 17-period Time Series Forecast, high-low channel.

In less recent news, the auto maker, which also trades in Germany as Volkswagen AG (VOW.XE), expects car sales to hit record levels in March. This came from sales chief Christian Klingler on the sidelines of a press conference Monday, according to a spokesman and reported by MarketWatch.

The company's car sales rose by more than 16% on the year in the first two months to around 1.2 million vehicles, outpacing the overall market's growth.

In 2010, the company posted record sales of about 7.2 million vehicles, driven by rising demand in China, Brazil and the U.S. This year sales are expected to increase at least 5%.

From a technical analysis view of the stock chart, VW is converging toward a rising 50 week moving average now at 23.94. Again, a recent proprietary Buy signal is noted using the Time Series Forecast with a 5 week bar count.

Adding a daily view, the stock is trading above the rising high-low 17-period channel of the Time Series Forecast indicator; and that, according this author, is short term bullish.

For the record, the Time Series Forecast or TSF represents the last point on a statistical method which uses Linear Regression to calculate a best fit line over a designated time period; this line is then plotted forward a user-defined time period.