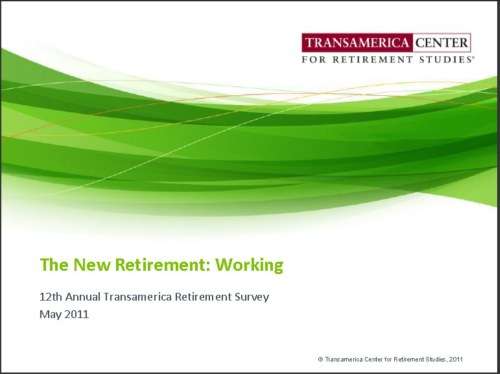 Reading between the lines of the recent survey by Transamerica Center for Retirement Studies, entitled "The New Retirement: Working", how will auto workers who perform physical labor and the auto companies who provide the jobs meet the challenge of a higher retirement age when the auto industry does not support working longer?
Advertisement

With the drive to cut the national deficit in America, it is understandable that everything is supposedly on the table, including social security and the retirement age.

According to the annual survey from the Transamerica Center for Retirement Studies® (“The Center”), a nonprofit private foundation, almost 4 in 10 workers said they’ll work long past the normal retirement age or simply never retire. Questions are, where and doing what?

The new research, however, underscores how American workers are largely unprepared for retirement; and further, how relatively few have a backup plan in the event they are forced into retirement earlier than planned.

The results of the 12th Annual Transamerica Retirement Survey—conducted among 4,080 American workers—found that for many Americans, the foundation of their retirement strategy is simply to not retire or to work considerably longer than the traditional retirement age of 65.

That may be easy for design engineers, financial planners and office workers to assume, but not line workers and machine tool builders. Continuing to work may simply mean not at an auto plant, and preferably at some other job or a new career or a home business.

Then again, other industries like construction have never enabled their employees to work much beyond early 60s, let alone 65, the present full-retirement age. There is simply too much wear and tear on the human body.

For certain, the salaried jobs everywhere are not exactly being protected either for this rise in retirement age. This reporter had planned on age 62 for retirement, but didn't make it due to conditions beyond my control, like a GM bankruptcy. That's why I write and trade the markets.

Another question is, will lawmakers in Washington consider these factors when they choose the new retirement bogie? Hard to tell, but understanding their constituants beyond political gain has not exactly been their forte.

Meanwhile, MarketWatch Andrea Coombes, personal finance editor based in San Francisco, quoted a survey of 4,080 U.S. workers conducted by Harris Interactive in February and March. 40% of workers said the recession will force them to work longer than planned. This is up from 28% who said that a year ago.

Now here’s the rub again: 54% said that even after they retire, they’ll continue to work. Question is still, where? And will they be physically able to work?

Time and chance happens to all. While many workers may plan to work past the traditional retirement age or never retire, unforeseen circumstances could force them to stop working before they planned. The Transamerica survey found the majority of workers are unprepared for this scenario—70 percent agree they could work until age 65 and still not have enough money saved to meet their retirement needs.

Point is, living longer does not automatically imply living well, abundantly or living vibrantly. So, raising the retirement age is no panacea for fixing the national deficit until the government can provide free-market economic policies that will induce job growth. Then and only then will workers be safe enough to live under the new retirement age rules.

Frank Sherosky wrote on May 18, 2011 - 11:21am Permalink
More About the 12th Annual Retirement Survey This survey was conducted online within the United States by Harris Interactive on behalf of Transamerica Center for Retirement Studies® between January 31, 2011 and March 10, 2011 among 4,080 full-time and part-time workers. Potential respondents were targeted based on job title and full-time and part-time status. Respondents met the following criteria: All U.S. residents, age 18 or older, full-time workers or part-time workers in for-profit companies, and employer size of 10 or more. Results were weighted as needed for the number of employees at companies in each employee size range. No estimates of theoretical sampling error can be calculated; a full methodology is available.