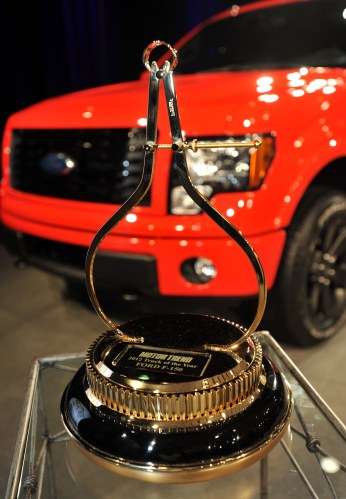 Always preceding the North American International Auto Show (NAIAS) in Detroit, nobody at TorqueNews seems surprised the 2012 Ford F-150 has been awarded the prestigious Motor Trend Truck of the Year® award.
Advertisement

The 2012 Ford F-150, which established a new standard for full-size pickups with best-in-class fuel efficiency and capability, was recently named Motor Trend’s 2012 Truck of the Year®. This is the fourth time the Ford F-150 has won the Motor Trend accolade; and once again was announced just before next month's North American International Auto Show (NAIAS) in Detroit, Michigan, where TorqueNews reporters will cover during media days.

In fact, the F-150 has won the award more times than any other truck; meaning, the most awards for any truck since Motor Trend began presenting its Truck of the Year award in 1989. The Ford pickup received the magazine’s prestigious award for previous groundbreaking new models in 1997, 2004 and 2009.

According to the Ford news release, the F-150 had outshone all other contenders in various tests that evaluated the truck’s design, engineering, performance, efficiency, safety and value. With class-leading fuel efficiency, capability and durability coupled with affordable technology, the 2012 Ford F-150 meets the demands of today’s full-size light-duty pickup customers.

“The 2012 F-150 is a no-compromise solution that can be tailored to fit virtually every customer’s needs, and the Motor Trend Truck of the Year award further reinforces that this is truly the best choice for America’s truck owners,” said Mark Fields, Ford president of The Americas. “We are proud to receive this award and even more pleased that our F-150 customers have additional validation of their top choice.”

Motor Trend editors applauded F-150 because, they said, “F-150s are built to work and felt better the more they were challenged. Ford offers an enormous variety of configurations and designs, making the truck tailorable to just about any need. It’s the combination of advancement in design, engineering excellence, efficiency, safety, value, and the performance of intended function that has earned the Ford F-150 the title of Motor Trend’s 2012 Truck of the Year.”

With more than a half-million sales through November and a lead of almost 150,000 sales versus the nearest competitor, the Ford F-Series is on track this year to extend its streak of truck leadership to 35 straight years.

Helping spark the F-150’s continued success is the powerful and fuel-efficient 3.5-liter EcoBoost® engine, which now accounts for more than 40 percent of F-150 retail sales and is on pace to exceed 100,000 sales in less than a year on the market.

The 2012 F-150 offers customers plenty of technologies that boost capability, performance, driving enjoyment and fuel efficiency. One such technology is the class-exclusive electric power-assisted steering (EPAS). The system has been carefully tuned with sophisticated speed mapping to deliver accurate responses at high speed while remaining light and manageable in parking maneuvers. Ford is the first manufacturer to widely offer EPAS on full-size pickup trucks. Furthermore, EPAS contributes about a 4 percent fuel-economy benefit compared with conventional hydraulic systems.

New features for 2012 include:

All of the changes for the 2012 model year complement a powertrain lineup that debuted in 2011. The powertrain lineup delivers a mix of best-in-class fuel economy, horsepower, torque and capability. Ford is also the first and only manufacturer to equip its entire full-size pickup truck lineup with a fuel-saving six-speed automatic transmission as standard. Engine highlights include:

Elon Makes a Cybertruck Statement With an Action, But Quiet in Words
Tesla's Record Month in China: Doubled Registrations in March 2021
END_OF_DOCUMENT_TOKEN_TO_BE_REPLACED