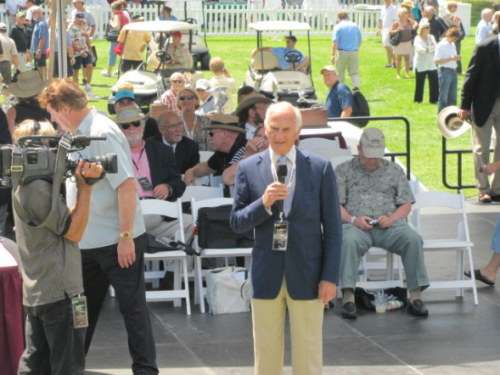 Chuck Jordan, the legendary design chief that helped usher in the modern era of styling at General Motors with the Motorama cars, passed away on Thursday.
Advertisement

The picture here shows Chuck Jordan describing the restored Motorama cars at the 2010 Concours d' Elegance of America at Meadowbrook. This may have been his last public appearance in the Detroit area.

Jordan was just the fourth man to hold the position of vice president of GM design, which he did from 1986 until his retirement in 1992. Jordan is credited with a long list of iconic GM designs during the 1950s and '60s, which set the tone for style throughout the entire industry.

According to past GM records as well as cited details in Auto Week, Jordan joined GM in 1949 after graduating from MIT. After working on projects as diverse as tractors and locomotives, his big break came when he moved to the advanced design studio, where he worked on several Motorama cars. Those eye-catching, collection of concept cars toured the United States in the '50s.

His also served as design director at Cadillac and Opel, as well as oversight of exterior styling for GM's premium brands.

Chuck Jordan is among the great names at GM, like Irv Rybicki, Bill Mitchell and Harley Earl. It was a mantle that passed to Wayne Cherry and now is in the hands of Ed Welburn.

According to Auto Week article, his wife plans to start a scholarship in his name at the College for Creative Studies in Detroit.

I remember Chuck Jordan in my early days at the GM Design Studio, just before he retired. I was on assignment from engineering and supporting the Saturn program.

My last experience with Mr. Jordan was taking pictures of him along with other judges at the Concours d' Elegance of America at Meadow Brook in suburban Detroit. He was so proud of the restored Motorama cars on display.