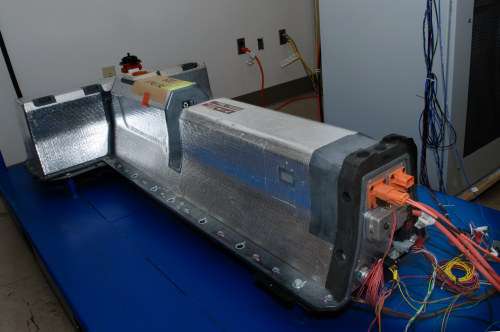 NHTSA closes investigation of Chevy Volt as having no defect trend

The National Highway Traffic Safety Administration (NHTSA) released a statement today regarding the conclusion of its safety defect investigation into the post-crash fire risk of Chevy Volts.
Advertisement

Good news for General Motors (NYSE: GM) and all EV manufacturers. NHTSA officially closed the Chevy Volt issue with PE11037, an assigned action number that the organization uses to identity and collect all reports related to an official issue like a safety defect investigation.

Contained within the summary report, NHTSA noted key words that takes the pressure off of GM. “A defect trend has not been identified at this time, and further investigation does not appear to be warranted. Accordingly, the investigation is closed. “

Elsewhere per NHTSA, official announcement of the document also read as follows: "Today, the National Highway Traffic Safety Administration closed its safety defect investigation into the potential risk of fire in Chevy Volts that have been involved in a serious crash. Opened on November 25, the agency’s investigation has concluded that no discernible defect trend exists and that the vehicle modifications recently developed by General Motors reduce the potential for battery intrusion resulting from side impacts."

Key to this investigation was the lack of evidence from other vehicles, including other brands. Nonetheless, NHTSA targeted the Volt noting that “it remains unaware of any real-world crashes that have resulted in a battery-related fire involving the Chevy Volt or any other electric vehicle. NHTSA continues to believe that electric vehicles show great promise as a safe and fuel-efficient option for American drivers.”

However, as the reports released in conjunction with the closure of the investigation today indicate, fires following NHTSA crash tests of the vehicle and its battery components, along with the innovative nature of this emerging technology, led the agency to take the unusual step of opening a safety defect investigation in the absence of data from real-world incidents.

In other words, NHTSA had little choice but to do the job that it is assigned to do. So no apology is necessary; and none will be given, despite the fact that many in GM and the industry will never say publicly that NHTSA violated protocol when it failed to drain the battery after such a violent crash test. The vehicle was simply placed in storage, and the fire did not occur until weeks later.

Then again, the government still owns GM (correction, at least big stake); so open criticism was out of the question.

Based on the available data, though, NHTSA stated openly it does not believe that Chevy Volts or other electric vehicles pose a greater risk of fire than gasoline-powered vehicles. Generally all vehicles have some risk of fire in the event of a serious crash. However, electric vehicles have specific attributes that should be made clear to consumers, the emergency response community, and tow truck operators and storage facilities.

Recognizing these considerations, NHTSA reported it has developed interim guidance — with the assistance of the National Fire Protection Association, the Department of Energy, and others — to increase awareness and identify appropriate safety measures for these groups. The agency expects this guidance will help inform the ongoing work by NFPA, DOE, and vehicle manufacturers to educate the emergency response community, law enforcement officers, and others about electric vehicles.

Anonymous wrote on January 20, 2012 - 5:57pm Permalink
what this guy has lost his mind, THE GOVERNMENT STILL OWNS GM no way gm paid back all that bailout money. i mean look at how great gm is doing the camaro is outselling everything, they are building all those new gm plants in china , getting out of control teens to build their engines %*&#^ government still owns gm give us tax payers a break.
Frank Sherosky wrote on January 20, 2012 - 6:11pm Permalink
Check the records, the government still owns a lot of GM stock. They didn't sell all of it. Now, maybe I missed a meeting plus a few news releases here and there, but I thought the amount merely went below the 50% mark, which merely means the government (as in, you-ness, me-ness, us-ness, we-ness) are no longer a majority stakeholder. According to an article by Phil LeBeau of CNBC, "The conspiracy theorists will immediately say the feds gave the Volt a big stamp of approval because Uncle Sam still owns 25 percent of the stock of Chevrolet's parent, General Motors." So, when and at what price did they sell the rest of the stock for? It's been in the tank since its IPO which means WE as taxpayers lost money on our investment if they did. And if there is no longer any stake as you state, then GM should have ripped NHTSA a new one for being so stupid by violating protocol. But, they punted.
Anonymous wrote on January 20, 2012 - 10:52pm Permalink
What protocol are you referring to? You must mean the one the was released by GM AFTER the NHTSA fire incident occurred. I doubt you can just safely slap a light bulb on a battery that size to discharge the thing, and the discharging process may get complicated further when the battery is impaled as it was in this case (and I doubt the intrusion was even noticeable given where it was). By the way: 1. If the tunnel contained a gas tank and it was intruded into in the same manner, it would have failed government standards immediately, 2. If they discharge the battery before the test, what do you suggest they replace the electricity with so leakage can be detected?, 3. I think it's strange that everyone refers to this as a severe crash when this car (and many others) get 5-stars and you may have a good change of walking away afterwords. That said, I think the whole thing HAS been blown out of proportion. Media (of which you're a member) and politics are the problem here, not GM or NHTSA who are both dealing with new, cutting edge tech. I think they are both doing a good job dealing with learning curve involved .
Frank Sherosky wrote on January 22, 2012 - 9:20pm Permalink
Comments like yours are often my favorite, because they reveal your having never designed, engineered and tested anything in your life; or, if you have, perhaps forgot. You are quick to take a provocative position which is OK by me, but in this case I think taking two opposing positions is confusing. First things first, though. There is always a protocol with every technology system, old and new. Even jump starting an IC engine has a protocol. GM may have humans in its organization but they are not stupid. They also assume NHTSA are degreed professionals who are not stupid and know how to follow directions. Besides, nowhere does the protocol (or me) say to drain the battery before the test as you imply (where did you get that?), but it does say after the crash test, especially a severe crash test which involves a pole. Yes, a pole crash is deemed severe even by NHTSA. So, your writ make no sense at all to me. I'm ok with an opinion, even a critical one, if it has a basis in logic. You initially insinuate that GM released the protocol AFTER the incident (cheap shot), then you protect GM and NHTSA. So, which side are you on? Elsewhere you use the word intrusion as if the body structure was a dagger, then say you doubt it was noticeable. Of course, electrons do not drain on the floor for all to see, and the coolant was obviously a small leak, and was contained within the structure. All the more the need for following a post-crash safety protocol with a high-voltage system. And had that crash occurred on the street, the protocol would have directed the fire department to drain the battery before it was ever placed on a storage lot. Why wouldn't NHTSA be expected to do any different? They had time! Fact is, a safety and post-crash protocol did exist but was not followed; end of story. No sane engineer (except NHTSA in this case) would test or allow a test without one; so NHTSA simply screwed up in my opinion. I just expected them to have the chutzpah to admit it; and their public statement is their immature way of admitting they were wrong without using those words. And, yes, they played politics by do so, but so did GM by not calling them on it. Then again, it's hard to criticize the government who saved their tail out of bankruptcy.
Frank Sherosky wrote on January 20, 2012 - 6:06pm Permalink
Just caught this at the tail end of the NHTSA report: The closing of this investigation does not constitute a finding by NHTSA that a safety-related defect does not exist, and the agency reserves the right to take additional action if warranted by new circumstances.

Elon Makes a Cybertruck Statement With an Action, But Quiet in Words
Tesla's Record Month in China: Doubled Registrations in March 2021
END_OF_DOCUMENT_TOKEN_TO_BE_REPLACED