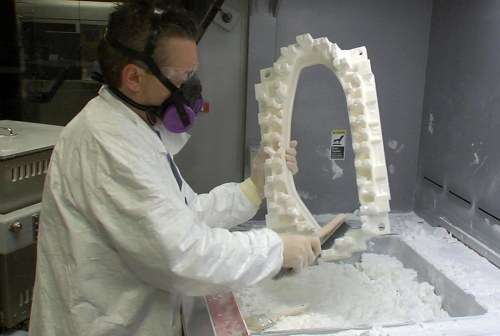 3D rapid prototyping has been fast tracking General Motors (NYSE: GM) design development for years. Now the process is being extended to produce parts vital to the global base of GM designers, aerodynamicists and engineers.
Advertisement

The goal of rapid prototyping as shown here via media.gm.com is to achieve huge gains in creativity, flexibility and accuracy along with dramatic savings in time and money.

So, think finished parts for prototypes and concepts that come from powder and liquid in just hours. That is the world of rapid prototyping, also known as stereo lithography.

According to recent news release by General Motors Company (NYSE: GM), much of this occurs deep inside the GM Design building at the Warren Tech Center in Warren, Michigan, where this reporter once had the privilege of working with this process. This is where future products from Chevrolet, Buick, GMC and Cadillac take shape and substance, and an elite team fashions components, intricate sub assembles and entire scale model cars from highly specialized three-dimensional rapid prototyping manufacturing equipment.

“Think of it as the reverse of slicing off cold-cuts at the deli counter, where each slice is created and joined back to the whole,” said Dave Bolognino, director of GM Design Fabrication Operations. “RP technology eliminates tooling plus it permits the production and testing of multiple iterations of a part or assembly with superb precision at little to no incremental expense. It’s a game-changer of epic proportion.”

Selective laser sintering (SLS) machines are used to fuse plastic, metal, ceramic or glass powders in cross- sections. A laser scans a pattern on the surface of the powder, fusing the particles together adding a layer four-thousandths of an inch thick. As each new layer of powder is added, scanned and fused to the previous one the part gradually takes shape within the 28-inch-cubed reservoir. To the naked eye, the plastic used in the SLS process looks much like powdered sugar with individual grains measuring just 550 microns or about two-hundredths of an inch across.

Technicians carefully position as many jobs as they can together within that space to maximize the throughput of each build request. The SLS manufacturing process is self-supporting, meaning un-fused powder cradles the part as it is being fabricated, often without need for additional finishing or trimming. After it cools, the excess powder is shaken off and a portion is recycled with the finished part put to use immediately or joined with other components to make larger assemblies.

Stereo lithography (SLA), on the other hand, combines photochemistry and laser technology to build parts from liquid photopolymer resins. These parts are also built up in layers as a UV laser traces the section onto the surface of the resin, curing the liquid into a solid as it scans. Because the resin won’t support the parts being formed, a fine lattice-like structure is generated below each part during the manufacturing process.

And while companies like GM, Ford and Chrysler all have SLA equipment, producing a two-piece assembly like a shifter knob with a hard substrate under a soft rubber-like material was a major challenge just three years ago. Now, a company like Objet has the equipment and the materials. Watch the video that I created at the 2011 SAE World Congress in Detroit..

Back to GM and its process

For the record, the process is still the same regardless of the material. Highly specialized software used at GM from Materialise Inc., for example, automatically calculates the required structure based on the original 3D model of the part so that it uses the least possible amount of material. When the parts are complete, the bottom plate rises out of the vat of resin and the lattice support is snapped off by hand leaving a ready-to-use part.

In order to deliver the part data, though, a separate conversion has to take place. For example, the class-A surface is developed by digital sculptors using a software like Alias. Then studio design engineers take this data into Unigraphics where the surface is given a B-side so as to complete its third dimension. Then that data is converted again into a STS file, a format the SLA and SLS machines can read.

Both technologies, SLS and SLA, were used on breakthrough vehicles like the pre-production Chevrolet Volt and advanced concepts like the Electric Networked Vehicle, known as the EN-V. In the case of the Volt, RP technology was used in areas ranging from design, development and validation of the battery cooling system to helping to lower its coefficient of drag.

“Thanks to the rapid pace of production from the RP Laboratory, GM’s aerodynamics lab has been to double its capacity of testing scale models over the past two years, contributing to improved fuel efficiency on future GM vehicles,” said Bolognino.
Labor-intensive projects that used to take weeks or months to sculpt in clay and then cut and cast in molds are now produced in a fraction of that time and expense.

From Brazil and China to Australia and Germany, as soon as the designer finishes creating a mathematical model in the Computer Aided Design (CAD) system, the digital file can be directly transferred to the RP Lab, which never sleeps. The lab manages a continuous flow of receiving, scheduling, manufacturing and express shipping of more than 20,000 components a year.

GM Design has been on the leading edge of rapid prototyping technology for nearly two decades and is highly regarded as a beta tester and innovator of new materials, formulas and processes by its supplier partners, 3D Systems Corp. and Materialise.

This is not the first time I have covered rapid prototyping, but the first I have seen GM openly boast of its capabilities. As noted earlier, I functioned as a studio design engineer and have direct experience with this process and its capabilities. As such, I find the industry becoming increasingly dependent on the RP due to it fast turnaround time.

Even then, the demand to go even faster is always there. For example, one has to decide up front whether a part is going to be reviewed for size, shape and feel, or will it be given paint as well for that production-like evaluation. That takes additional time.

Also, keep in mind, that these materials are often brittle, especially for snap tabs; making them incapable of functioning in full engineering tests, especially where mechanical loads are used. Still, the industry is evolving to the degree where that is changing. Materials are already being developed for low-volume production runs which can function mechanically as well as a molded part.