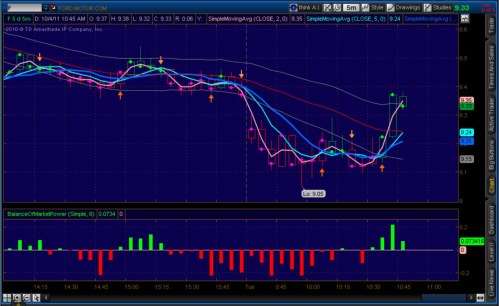 New news can have a significant effect on a stock. Such is the case with traders and investors of Ford stock as details of the tentative agreement between Ford Motor Company (NYSE: F) and the UAW begin to surface. [Evening Market Update: Ford closes higher.]
Advertisement

Ford Motor Company (NYSE: F) and the United Auto Workers (UAW) did not release details of the pact, but analysts expect it to be similar to an earlier deal with General Motors Company (NYSE: GM). Question is, how much did Ford sweeten the economic terms to win ratification from Ford workers?

According to reports from the Center for Automotive Research in Ann Arbor, Mich., Ford's hourly labor costs (wages and benefits) are estimated to have averaged $58 in 2010, compared with $56 at GM and $49 at Chrysler.

The union planned to focus on Ford last, but changed tactics when talks with Chrysler hit a roadblock following the GM settlement. The primary reason for focusing on Ford is that Ford swung to a profit of $2.7 billion in 2009 and $6.6 billion last year, after combined losses of $30 billion between 2006 to 2008.

Ford stock opened lower this morning relative to yesterday‘s close of 9.37, but had shown some resilience after the Ford media communication surrounding the agreement, only to fall back below the upper price gap during ht efirst hour. Then again, it’s early; so there is plenty of trading day left for the information to filter into traders’ minds.

Unfortunately, Ford stock already put in a new 52-week low of 9.05 at 9:55 a.m. which will become a significant level of price support on the daily and intra-day charts. After that time, though, the stock has been attempting to move up to fill the price gap left over from this morning’s open relative to yesterday’s close; and that finally occurred at 10.40 a.m.

In the meantime, stay tuned to Torque News for any change in Ford stock as we report on price dynamics using charts and technical analysis.

Just remember that Ford stock will have to close today above yesterday's close of 9.37 to have any positive effect on trading mentality. And by the intra-day chart shown of the first hour, it was having trouble deciding, despite that 10:40 upsurge. Fact is, traders are digesting the news; and that takes time as details come out slowly.

Frank Sherosky wrote on October 4, 2011 - 12:27pm Permalink
Ford stock finally made a move to the upside; not by much, but a start. I picked up a few shares for my long-term IRA; that is, after I wrote my article on Ford stock and noticed the techncial move in price. I suggest reading Patrick Rall's article on the agreement as support for the fundamental outlook.
Car guy wrote on October 4, 2011 - 4:41pm Permalink
I think Ford Motor Company's stock (Public, NYSE:F) did a nice move today. During the trading hours it closed at $10.08, which is up 7.58 percent from yesterday's close. However, during the after-hours trading it's losing little less than one percent of the value.
Frank Sherosky wrote on October 4, 2011 - 9:53pm Permalink
I just did an update to the article. Note that Ford stock likely went strong with the general market more than the UAW news. At least, that's my opinion. I think the vote by the rank and file for ratification will have more effect.

Toyota vs Tesla: Which Stock To Buy These Days
For Some Former Daimler Managers Daimler Is Authority, While Tesla Is Like a Startup
END_OF_DOCUMENT_TOKEN_TO_BE_REPLACED