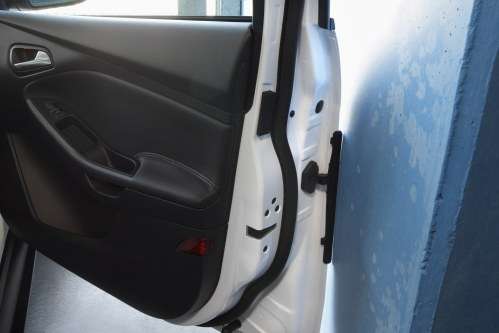 Ford’s new Door Edge Protector is the first active system to help prevent costly dents and scratches and to provide a buffer to protect neighboring vehicles. Aside from appearing on the 2012 Ford Focus in Europe, question is, when will it appear in America?
Advertisement

How many times have you walked up to your car and noticed a new ding in the parking lot, either on your body panel or on your door? Well, if you’re parked next to a Ford in England in the near future, your chances of not having any damage will highly improve.

Some news reports are ubiquitous in that any search on the web will avail a plethora of links to the same story; not so with this one on Ford Motor company (NYSE: F) latest idea. Fact is, if it hadn’t been for my connection to the Autobeat Insider Conference that I attended this past summer, I might have missed their latest web report on the Ford ding prevention system which brought this to my attention.

The idea didn’t originate in America either. Engineers in Cologne, Germany have developed a unique device that pops out from the edge of a car door and shields the door edge from being damaged by an obstruction. Furthermore, it prevents inflicting a ding in the door of another vehicle parked nearby.

The feature, called Door Edge Protector, will debut in early 2012 on the Ford Focus, but will appear in England and Europe first, at least according to the news release, where narrow streets seem to be the norm, more so than in America.

Still, my first thoughts were, I not only want one, but hope this becomes standard on all vehicles including America. Both of my cars suffer from this dreaded social disease like everyone else who owns and parks a car.

Of course, not much seemed to be written about this system until I perused the Ford media site of which I have direct access. Even a search there on door dings resulted in nothing, much to my surprise. (Ford has to get a better search engine, in my opinion.) Nonetheless, I did find a group of photos which led to a few lines of text for some basic description, and that led to the key words that enabled the news release.

Autobeat Insider was not exactly forthcoming in declaring its source for this new bit of news either; and they were light on details. So, I assumed it came directly from Ford in Europe; perhaps it was revealed at the Frankfurt Motor Show 2011. Again, this was not clear.

AutoBeat‘s article revealed the new system debuts in January in European versions of the Ford Focus small car; and that's where I got this not-in-America? concern.

As a design engineer, I first surmised the system is either fully mechanical with cams for timing the extension and retraction, or the unit extends and retracts using solenoids via an electro-mechanical pusher. What else is there?

Well, according to Ford’s own art photos, there is actually a door-mounted actuator pin which mechanically actuates a Bowden cable hidden inside the door when the door is opened 240 mm or more (that’s 6 inches), and it retracts out of sight in 60 milliseconds when the door is closed. On the door edge there is a rubber coated flap.

Also according to Ford, there are 8 moving parts with a total system part count of 22.

I think this system is far from rocket science, meaning I could have designed this system, but frankly, I never thought of it. I complained like everyone else. So, kudos to Ford for acting on a real need, as Ford expects the mechanical systems’ six-inch-long rubber bumper will shield the front door edges about 90% of obstructions and 85% for rear doors.

According to Matthew Avery, crash and safety research manager at Thatcham, the UK Motor Insurance Repair Research Centre, “Ford’s new Door Edge Protector is an excellent innovation for preventing these annoying dents and scratches. Any system that can reduce the risk of damage to your own or someone else’s vehicle is worthy of recognition, but one that operates so effectively without affecting the looks or performance is particularly noteworthy.”

I have to agree with Mr. Avery. Ford has shown its chutzpah in that once again the company has proven the old adage, “Ford has a better idea,” is still in play. Just be sure it comes to America, too; that's all I ask.

Geraldo Brizot wrote on May 24, 2012 - 9:47pm Permalink
Hello, I am from Brazil and patented a mechanism that is similar to this in regard to Protection of the car door's EDGE; and I instaled in﻿ my small truck ( a 2011 Chevrolet Montana Pick up) It's a homemade product and video but it gives one an idea of what could be done if made by a big Automaker. It offers a better protection to the edge of the doos for having a IMPACT SUSTAINER MECHANISM, witch the Ford's model does not have. Please watch the YouTube video under title " PROTETOR DE BORDA DE PORTA DE AUTOMOVEL" and pay special attention to the part 1:38 to 1:49 that shows the Impact Sustainer Mechanism at work, keeping the door edge away, while protecting the surface in contact with it. ( the protector is made out of soft rubber) Keep in mind it is "homemade" and of course doesn't offer the fit and finish of a final﻿ product. If you could please give me your thoughts and opinions about it I would really appreciate.
C.B. Riley wrote on January 27, 2015 - 4:28pm Permalink
Consider optional front and back seats to swivle that raise/lower for easier access for elderly or handicaped people in all vehicles

Tesla Contemplates A New Strategy for China Retail even As Sales Boom
Jay Leno on Elon Musk & EVs: “I Think He Should Get ... Credit"
END_OF_DOCUMENT_TOKEN_TO_BE_REPLACED