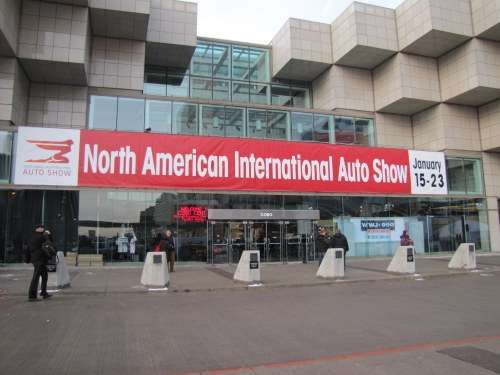 The first day of the 2011 NAIAS press coverage at the Detroit Auto Show was kicked off early with the Car and Truck of the Year Awards. Aside from Chevy Volt and the Ford Explorer winning the coveted event, the day revealed more and more products, a host of interviews and events and reveals.
Advertisement

I noted that it takes a design engineering eye to catch those nuances that can get lost among all the hype at the 2011 Detroit Auto Show. So, after tweeting most of the day from the floor, here is my report for the evening.

First, the Chevy Volt was announced on WJR by Paul W. Smith promptly at 8 a.m. So, what was that 8 - 8:30 window all about? Still, the Volt was not giant surprise. The Ford Explorer, though, did catch a few people; not that it didn’t deserve it.

I tweeted that the tech display at Ford was nowhere near as good as 2010. In fact, it was a play at best, in my opinion. Still Ford made its mark with Ecoboost. And the Focus EV was announced at CES 2011. What else can they do?

I did manage a few minutes with John Mack, a program director at General Motors. Fact is, I know the man from my GM days in the studio. He is now responsible for the Chevy Sonic.

I asked John if GM was considering using the Sonic for green-tech entries like nat-gas. He was unsure; meaning he could not speak for power train, but noted that Ford built its latest EV off of the Focus platform. That implied to me the same could happen at GM. Besides, GM wants to make this a youth oriented, performance vehicle.

I sat in the Chevy Volt at 5’ 6’’ but the guy in the back was 6’1” and he was cramped. Still the drive in the basement was unique; very quiet. Unable to get any real speed on a tight course. By the way, I passed the breath test before I drove!

I was very impressed with Scion IQ pre-production. It had a very wide stance as compared to the Smart. It had 3+1 seating. Really liked the IP surface; looked like a linen cloth, but it was molded into the plastic to look like it. Nice and different, less glare.

Impreza Concept by Subaru was most impressive, but it was the Hyundai CURB that caught my heart and my eye. I predict it might win the EyesOn Design Award for the interior design alone. The exterior design was aggressive, but that flat white exterior looked too much like primer to me.

2011 Honda CR-Z Hybrid R Concept looked great. Paint was red metallic. I couldn’t tell if was really a hybrid or not. The name stated so, but he description did not.

Mr. Marchione of Fiat has a commanding presence at news conferences, much like Bob Lutz. He talks and people strain to listen.

That World Premier of the all-new, BMW 1 Series M Coupe made my design mind and engineering mind really come together. HOT.

End of day event: I do believe I was scoped for an explosive or something. This guy shows up real, real close to me as I was reading about the Honda CR-X. Then his dog that does this sniff routine. Well I like dogs, and my wife has her own grooming business. So, at first I thought it was a leader-dog training event; and then it hit me. I had a back pack on to carry all my stuff. If they were so concerned, why wasn’t there an incoming inspection? No matter, I fully understood.

All in all, it was a great first day at the 2011 Detroit Auto Show. Tuesday will focus on tech and EyesOn Design Award. Then again, I’m always focused on tech. More on ZF, Denso, Electric Avenue and the auto audio wonders of Bongiovi acoustics tomorrow. Stay tuned for my tweets and end of day report.