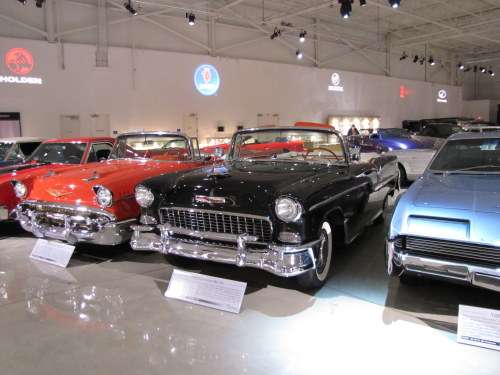 Imagine if you had five more computer operating systems than just Windows, and in order to get a new job, you had to be fluent in all of them, not to mention proficient. Then you get the scope of the problem still plaguing many within Detroit's unemployed engineering and design community, while the auto industry cries that it cannot find skilled designers.
Advertisement

Look at that photo. A visit to the GM Heritage Center in Sterling Heights, Michigan is a classic example of what can and had been accomplished long before there ever was a single CAD system in the arsenal of Detroit's auto industry. Now multiple systems permeate the industry, but something got lost in the process: designer skills portability which is still affecting the unemployment level.

The last time I called upon the SAE to help lead the auto industry toward slimming down the eclectic list of CAD systems in the auto industry, nothing really happened except an email. So, in light of companies complaining they cannot find qualified U.S. engineers and CAD designers, allow me to state the case once again.

CAD (Computer Aided Design) tools are used by engineers and designers to design, integrate and develop automotive products, at least in Detroit. Problem is, too many qualified CAD operators have been put at a disadvanatge, and so has the auto industry, which has been shooting itslef in the foot since 1980.

Ever searching for personnel with higher degrees as if that's all that is ever needed, they forgot what and who designs the parts: and it certainly is not a degreed manager. No, it's the CAD grunts sitting at their stations, who are pressured to attend more and more meetings with managers who cannot even create a 3D part. That, however, was not always the case.

When I first entered the drafting trade in 1969 at Holley Carburetor, I had a basic structural-mechanic education from the U.S. Navy, my own briefcase with a full set of drafting tools that my father gave me, and a desire to learn tool design. A few years later, I moved from tooling to industrial products; then eventually migrated toward automotive product development.

With each job move, from Holley, Benton, Johnstone Pump, Lectron Products, ISI Automation, Essex and finally to Saturn and GM, I took the same tools with me, but with increased experience and confidence as a tradesman. All my knowledge and skills were truly portable.

About 1980, CAD came along and changed the entire design field as a trade. The ability to design complex parts and vehicles in less time became a reality, but management’s fear of unionization contributed greatly to the decision for each automaker to select its own proprietary system; in essence, scuttling the ability of designers to move around like the old days.

Now, in order to increase the odds for a new job, designers and engineers have to be fluent and proficient in at least three of the many complex CAD systems. Here are just a few used by GM, Ford , Chrysler, Toyota, Hyundai, BAE Systems and their suppliers, and this list is far from complete:

Now, imagine if the office environment had that many different operating systems; and Word, Excel and Powerpoint don't even come close to a CAD system's complexity.

It’s not hard to imagine a designer today with at least a two-year technical degree or greater losing his or her job. They may even have a bachelor or their masters; perhaps spent the last ten or twenty years working diligently on one CAD system, perhaps a system like Unigraphics.

Now what should a designer do when the next opportunity has a different system? Go back to school or get a higher-tech job, when design IS already high tech?

I know there are many in the Detroit area who can relate. A designer might find a job on the web that uses UG, but has to fight the crowd for attention. So, he fires off his resume to another job. This one, however, demands Catia-V6, not V5 or V4; and they want years of experience, not a newbie. So, he looks at alternate industries like aerospace or military only to find their job requirement may be Pro-E. Get the picture?

The seeds of today’s CAD skill-portability problems were sown long ago. It’s not a designer’s fault. Now, most employers want everything, a jack of all trades and master of all. They want a designer and an engineer all in one; hence the term, design-engineer. But, they don’t want to lessen the workload like meetings.

The modern design-job paradigm demands, not just knowledge of many CAD systems, but proficiency in each; and no more sole reliance on IGES or STEP translators.

Missing is the realization that the engineering degree may be fully portable, but the CAD skills are not. Why? Any CAD is a complicated system; and even with a common system, there are too many disjointed methods of modeling.

Some use 3D chunky solids; others use 3D parametric modeling with sketcher features. Heck, some companies segregate integration criteria from part modules; then spend time and money revisiting packaging issues that should be automated. Talk about inefficiency and wasteful allocation of resources.

This, I believe, is the direct fault of most company’s greed for control, and its degreed ignorance to be sold a bill of CAD goods that now shoots them in both feet. It all started when they got rid of design managers who were realists, because those came from the board. Higher management types instead opted for the advice of CAD specialists who know and sell systems, but cannot design to save their neck; and fail to see the big picture of design as a trade, not just a profession.

My past design managers like Fred Hafer, Doug Drouillard, Gerry Milner, Frank Guglielmi and Pat Johnson understood the breeding it took just to design on the board, let alone use a CAD system. It certainly took more than a sheepskin with hunting and pecking skills. It required pure time in grade; in other words, time modeling away from redundant meetings – a distraction from proficiency and a full-time job in its own rite.

The dilemma has a viable solution

The industry lost something it once cherished – the sensibility to recognize the value of knowledge and skill portability. Today, automakers suffer mostly from lack of vision or inaction; and always resorting to more and more training as the only way to counteract any dilemma.

I say the high cost of education now demands the auto industry to refocus on one design system. In other words, let’s get back to that portability we once knew. We did it with SAE standards and data translators. Imagine a skilled pool of designers and engineers, common in standards and fully portable. That would be good for the industry, as well as Detroit’s high-tech economy.

In the meantime, I urge SAE once again to drive sensibility back into the industry. I can do my part at this post, but it takes a village as someone once said; in this case, an engineering village with some sensibility.