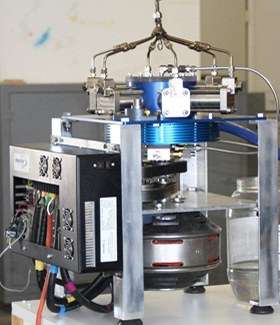 According to its latest news release, Cyclone Power has filed to protect the WHE (Waste Heat Engine) in over 45 nations including the European Union, China and India, all areas where the company has received strong interest in commercializing its green engine technology.

Initially designed to run on waste heat from the exhaust of industrial furnaces, diesel engines and gas turbines, Cyclone's WHE has also been adapted for other recovered energy applications.

For the record, this is the same basic technology that will power the steam engine that will attempt to break the LSR (Land Speed Record) later this summer at Bonneville Salt Flats in Utah.

In 2010, Cyclone delivered to its customer, Robotic Technologies, a WHE system designed to run on combusted wood pellets and other vegetative biomass. This autonomous robotics project, called the EATR, was funded through the U.S. Department of Defense; however, myriad commercial applications exist throughout the world for distributed power generators that run on biomass.

"We see great business opportunities globally for the WHE to be used to generate power from all types of waste resources - from heat off industrial plants in emerging markets where efficiencies and emissions are becoming increasingly scrutinized, to agricultural waste combustion in rural communities where traditional fuels are scarce," stated Christopher Nelson, President of Cyclone and Managing Director of the company's WHE division. "Our capital investment in patenting this technology internationally demonstrates our continued focus on seeking key commercial markets for our engines, and protecting the company's assets for the benefit of our shareholders."

Also for the record, Cyclone Power Technologies is publicly traded, and is the developer of the award-winning Cyclone Engine - an all-fuel, clean-tech engine with the power and versatility to run everything from waste energy electric generators and solar thermal systems to cars, trucks and locomotives.

Invented by company founder and CEO Harry Schoell, the patented Cyclone Engine is a eco-friendly external combustion engine (EXE), ingeniously designed to achieve high thermal efficiencies through a compact heat-regenerative process, and to run on virtually any fuel - including bio-diesels, syngas or solar - while emitting fewer greenhouse gases and irritating pollutants into the air.

Per the company website, the heart of the WHE-25 is the 25cu.in. engine capable of producing up to 16 HP of mechanical output, which is sufficient to power a 10 kW electrical generator. This means that one engine offers the potential to supply a significant portion of the energy requirements of a home or small commercial facility. Multiple engines in-line or networked can be used to generate greater power output – up to about 100kW.

Connected with an engine exhaust system, such as an 18-wheeler, the WHE-25 can substantially boost the overall efficiency and lower overall emissions of the prime mover engine. The WHE-25 system can be used as an Auxiliary Power Unit, running a truck’s electrical (or refrigeration) requirements of exhaust heat when the vehicle is in motion, and then off a separate gas or propane line when at rest.

Cyclone isespecially working to develop larger-scale waste heat engines configurations. These engine systems will harvest heat from larger industrial furnaces, foundries and other heat producing (and wasting) equipment, as well as higher quality heat – up to about 2200ºF.

Full Disclosure: Frank holds a small equity stake in this stock as part of his long-term IRA investments