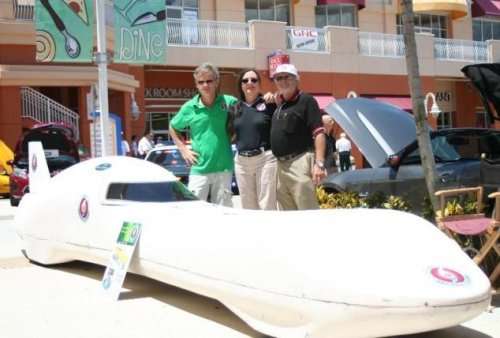 Cyclone Power Technologies Inc. (Pink Sheets: CYPW), developer of the award-winning Cyclone Engine - an eco-friendly external combustion engine - and Team Steam USA presented to the public for the first time what is soon to be the "Fastest Steam Car on Earth" at the Disabled American Veterans Classic Car and Truck Show in Pompano Beach, FL.
Advertisement

The title of fastest steam powered car on earth is currently held by the British "Team Inspiration", which broke the record in 2009 at 148mph. With the "stock" Cyclone engine designed for everyday passenger vehicles, Team Steam USA believes they will surpass speeds of 160 mph.

According to the news release, Cyclone has chosen its 100hp Mark V external combustion engine to power the Team Steam USA land speed record (LSR) car in its record breaking attempt, scheduled for later this year. The powerful, compact Cyclone engine boasts very low emissions and can run on virtually any fuel, including 100% bio-fuel or multi-fuel mixtures. Rigorous testing of this engine continues this month before it is placed in the LSR car.

"This undertaking is not just about breaking speed records, but rather, it is meant to shine a spotlight on the power, fuel versatility and clean-air benefits of our technology, especially as it pertains to the automobile industry," stated Christopher Nelson, President of Cyclone. "Unlike plug-in electric formats, the Cyclone engine can power the types of cars and trucks Americans want to drive, and can do so cheaper and cleaner than today's engine alternatives."

"We saw this event supporting our national heroes as a great opportunity to showcase our car and engine technology," stated Chuk Williams, Team Steam USA captain and driver. "We want to bring the title back to the U.S. with American ingenuity running on 100% American made fuel."

Sponsorship opportunities are available for corporations and individuals who want to participate in automotive racing and clean-energy history. Specifically, the team is looking for a sponsor to provide American-made bio-fuel that can ultimately be produced cheaper than traditional fossil fuels. For more information, visit the USLSR site : www.USlandsteamrecord.com.

Cyclone Power Technologies is the developer of the award-winning Cyclone Engine - an eco-friendly external combustion engine with the power and versatility to run everything from distributed solar thermal and waste heat electric generators to cars, trucks and locomotives. Invented by company founder and CEO Harry Schoell, the patented Cyclone Engine is a modern day steam engine, ingeniously designed to achieve high thermal efficiencies through a compact heat-regenerative process, and to run on virtually any fuel - including bio-diesels, syngas or solar - while emitting fewer greenhouse gases and irritating pollutants into the air.

Currently in its late stages of development, the Cyclone Engine was recognized by Popular Science Magazine as the Invention of the Year for 2008, and was presented with the Society of Automotive Engineers' AEI Tech Award in 2006 and 2008. Additionally, Cyclone was recently named Environmental Business of the Year by the Broward County Environmental Protection Department. For more information, visit www.cyclonepower.com.

Full Disclosure: Frank holds a small equity stake in this stock as part of his long-term IRA investments