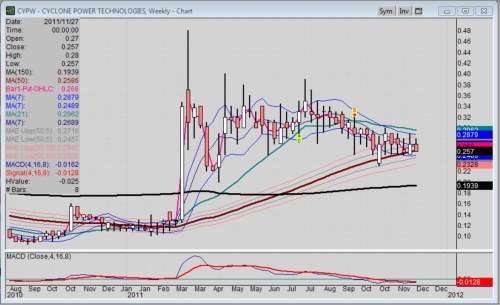 Christopher Nelson, Cyclone's President, commented: "We're extremely pleased to complete this arduous review process. Now that we're fully-reporting and trading on the OTCQB, we believe we'll be able to increase Cyclone's visibility in the global capital markets, and provide a higher level of comfort for current and prospective strategic partners. This is already beginning to result in exciting new opportunities for Cyclone. Of course, however, our focus continues to be bringing our engine technology to market and generating sustainable revenue from operations, which we anticipate in 2012."

According to the news release, no shares of Cyclone's stock were registered for sale under this Form 10 registration statement. For the record, Cyclone's shares began trading on the OTCQB on Friday, November 18, 2011, under the same ticker symbol "CYPW."

The last time this reporter wrote about Cyclone Power technologies, the company had reported on its 3rd quarter results. Furthermore, the stock symbol was still listed on the pink sheets. So, this latest up-grade is a significant event for the stock, although the stock has not significantly moved either way for many weeks.

Christopher Nelson, Cyclone's President, commented then: "This is significant milestone in our company's evolution - one that has taken a considerable investment of time and resources to achieve. Our shareholders should see this as a reflection of management's commitment to the growth, and confidence in the future, of Cyclone. We're working hard to build investor trust and broaden our market visibility, which are steps we believe will lead to increased financial and business opportunities for Cyclone."

Fact is, the OTCQB, part of the OTC Markets Group, is available to companies that report to the Securities Exchange Commission and remain current with all required disclosure filings.

CYPW has been in a trading range for many months. Perhaps now the stock will be able to garner greater coverage, as the technology is certainly viable. As I have written before, it’s the technology and its potential that has had this reporter’s interest.

Looking back over 2011, one can see tremendous gains in tech acceptance, especially by the military. Most notable was the statement by Raytheon that Cyclone Power’s engine is “a game changer.”

Regarding the price dynamics, though, Cyclone Power is still not an expensive stock; in fact, it is still regarded as a penny stock. However, CYPW is trading just above its 50-week moving average which is above the 150-week or 3-year moving average; and that’s still bullish by definition.

The question in investors’ minds is this: Is the technology sufficiently viable to garner attention by any larger investment funds? Many funds, for example, will not touch a stock less than $15; and some at less than $8. And that’s what’s needed to propel this stock to greater heights, institutional participation. It is the “I” in the CANSLIM formula that Investors’ Business Daily promotes from the book of founder, William O’Neil.

Catalysts that have the potential to invoke investors‘ hearts and minds, however, come in all shapes and sizes; and the greatest catalyst right now for CYPW is the attention by the military and the utility companies for driving generators using waste fuel.

Another catalyst is the run for the land speed record. That is why this reporter has been watching for that news. Unfortunately, it was cancelled at Bonneville for 2011, and the development was transferred to the NASA runway where the run might still occur. What is taking so long?

Another question is, is this a budding technology that will one day operate on prime time for transportation? Time will tell, but steam power for autos is not new.

If I was running the company, I would place a Cyclone Power engine into a Chevy Volt to replace that inefficient generator motor. Then the car would be greener than it is right now, even capable of running on nat-gas and /or waste fuel. Think about the halo image that would derive.

Better yet, how about placing an engine into a vehicle and drive it directly with waste fuel, natural gas or even gasoline? Point is, investors are driven by results. And until the profits roll in like water, it takes plenty of exposure to get and maintain attention.

LG's New EV Battery Plant Is a Welcome News for Tesla
Tesla Giga Berlin's New Hurdle: It's Not Only the Gov't, but Now Tesla Itself
END_OF_DOCUMENT_TOKEN_TO_BE_REPLACED