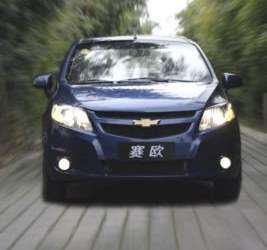 According to today’s GM media release, the latest sales figure for the Chevrolet New Sail set a record for the month; and confirms GM is still on a solid path in the Chinese auto market.
Advertisement

In 2011, GM sold more than 2.5 million vehicles in China, making it the sales leader among global automakers in the market for seven consecutive years; but that was then.

The first two months of 2012 are already indicating a similar pattern, with an increase of 7.7 percent from the same period last year for GM and its joint ventures, selling a record 487,208 cars and trucks in China.

More specific, February sales of the Chevrolet New Sail alone rose 34.1 percent on an annual basis to 14,184 units as General Motors Company (NYSE: GM) and its joint ventures sold 240,554 cars and trucks in China in the month of February.

That means overall sales rose 30.4 percent from February 2011 and were the third highest for any month in GM’s history in China.

Also according to the GM media release, all three of GM’s primary manufacturing joint ventures set February records as well. Shanghai GM’s domestic sales, for example, rose 31.8 percent year on year to 103,097 units; SAIC-GM-Wuling’s sales in China increased 28.7 percent on an annual basis to 130,193 units, and FAW-GM’s sales in the domestic market were up 39.2 percent year on year to 7,068 units.

Sales of the Cadillac brand were up 6.6 percent year on year to 2,124 units – a record for the luxury brand in February. It was led by the popular SRX luxury utility vehicle, which had sales of 1,527 units.

Benefiting from Sunshine minivan sales of 50,950 units, the Wuling brand sold 117,969 units in China. This represented an increase of 24.5 percent from the second month of 2011 and was an all-time February high. The Baojun brand had sales of 8,017 units in its first February in the market.

General Motors may trace its roots back to 1908, but has now grown to include 11 joint ventures, two wholly owned foreign enterprises and more than 35,000 employees in China.

GM and its joint ventures offer the broadest lineup of vehicles and brands among automakers in China. Passenger cars and commercial vehicles are sold under the Baojun, Buick, Cadillac, Chevrolet, Jiefang, Opel and Wuling brands.

LG's New EV Battery Plant Is a Welcome News for Tesla
Tesla Giga Berlin's New Hurdle: It's Not Only the Gov't, but Now Tesla Itself
END_OF_DOCUMENT_TOKEN_TO_BE_REPLACED