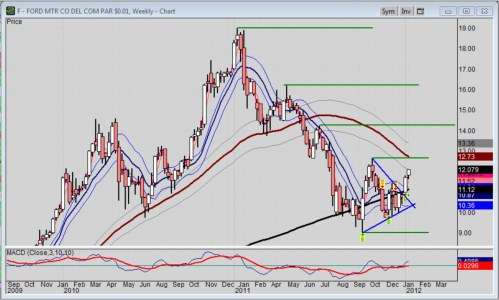 Based on the NAIAS 2012, why is Ford stock still trading so low?

If the stock market is supposed to be a forward-looking entity, then judging from the display at the NAIAS 2012 in Detroit, one has to wonder what are the factors that are keeping Ford stock from moving significantly higher.
Advertisement

Based on my recent article, NAIAS 2012 Press Preview Day 2: great signs of industry enthusiasm , it is easy to see that Detroit and the auto industry are once again buzzing with excitement. However, to those still without a job or still on the verge of losing their job and home, things may not be so exciting after all.

Nonetheless, one look at the weekly chart here, Ford Motor Company (NYSE: F) has indeed broken out past its previous wedge pattern from a few weeks ago. Question is, how far might Ford stock rise before it pauses or turns in a profit-taking sell-ff?

My visits to the Ford displays at the North American International Auto Show for the last three years has me thinking that Ford is at the very least, a most stable company, especially when you view products and technology. My visit to NAIAS 2012 during Press Preview reaffirms my opinion. Read: NAIAS 2012 EyesOn Design awards go to Ford Fusion and Lexus LF-LC

Yes, there is long-term debt. Yes, they did not take a government bailout. Yes, Alan Malally has done a great job and may retire in few years.

On the product front, Ford has a stable of technologies that nearly cover the entire spectrum. Furthermore, its EcoBoost engines allow for smaller displacements which avail less pollution but at the expense of power, which is made up by the extensive use of turbochargers; in some cases, more than one.

Looking further forward, Ford engines will likely use cylinder shut-off to lessen pollution and increase gas mileage further. And the recent acquisition by Valeo of the electric supercharger technology may eventually end up with Ford as well, but that is my assumption only, not fact.

Furthermore, Ford has made hybrids and full EVs as part of its lineup.

So far, Ford stock is still in the breakout mode from its wedge pattern; and that is good for investors. For the record, I have been long Ford in the case of March call options for my retirement account.

Question is, how far might Ford stock rise? Last time I wrote, the 9.05 low of October 4th stood as major support that dates back to the 6.61 low of October, 2009. That assessment till stands. The level of distant upside resistance also stands at the 16.18 high from April, 2011.

A resistance level just below that level of upside resistance is in the 14.00 area. This coincides with the 52-week midpoint of 14.01; but the value of that level depends on the volume of new buyers that may or may not come into the market at this point and in the following weeks.

Fact is, Ford stock first has to break out past the wedge pattern high of 12.56 to make me feel comfortable; and preferably with a base pattern above that point, which is not that far away. Ford is trading as I write at 11.77, but made a recent high at 12.05. So, patience is in order.

Despite all the excitement that NAIAS 2012 exudes, do not be surprised if Ford stock breaks down at some point, as bull moves do not go straight up, but often pause, retract, sell off until new buyers come in. Still, that matter is based on market perception. If the general market is strong, then Ford will likely be strong. Same goes for Toyota ad GM stock.

This is not advice to buy Ford stock. It is merely my assessment of the stock price dynamics as they stand, coupled with the fundamentals as I see them through the eyes of a reporter at the NAIAS 2012.

[Disclosure Update 2012-0112: I decided to take profits today on my Ford March Call options since the run past the breakout point is getting old. It comes with beinga trader. I will look for a pullback to trade this again with options. Although owning the stock is also a possibility, options for me prvide the better value due to lower upfront costs.]

Tsingshan's Threat to Tesla: EV Maker Is In Battery Crosshairs
Tesla-Funded Research Reveals One of The Biggest Mysteries of EV Battery
END_OF_DOCUMENT_TOKEN_TO_BE_REPLACED