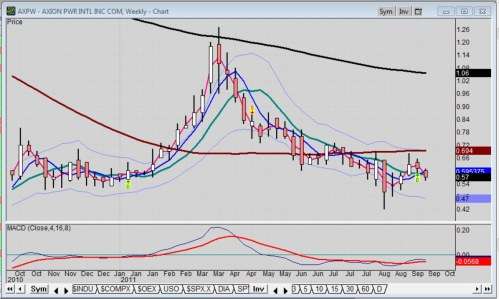 Since investors like to track disruptive technologies, it appears they now have one with Axion Power (OTCBB: AXPW) which takes a novel electrode approach to increasing charge/discharge rates for a new PbC (lead-carbon) battery for stop-start applications.
Advertisement

I am neither new to this technology or to the company, Axion Power (OTCBB: AXPW) as noted by the weekly chart which I track. In fact, I wrote in June, “Do not count lead-acid batteries out of the energy picture yet, especially for the micro-hybrid vehicle market featuring stop-start. The Axion PbC® technology represents the first major advance in lead-acid battery and electrode technology in 30 years.”

In truth, I still stand behind that assessment; and here's why:

The basic problem with stop-start systems centers on their unique demands which require their batteries to operate consistently at a partial state of charge, while conventional lead-acid batteries rapidly deteriorate if they're not kept fully charged.

So, what we have here is a fundamental mismatch between the needs of the application and the capabilities of present battery technology. Nothing new under the sun here, except when a new battery technology disrupts mainstream approaches!

Investing websites are taking notice, too. According to a web article by SeekingAlpha.com on Axion Power (OTCBB: AXPW) a few months ago, present technology is noted to be insufficient. For example, they say flooded lead-acid batteries deteriorate within weeks; with valve-regulated AGM batteries, it takes a few months. Point is, over time, the mechanical systems can just stop working as a result.

For Every Problem There is a Solution Eventually

Regardless of what the solution in this case may be, it has to be designed for simple manufacture and scalability, plus it has to be cost effective; meaning, cheap enough for average folks to afford.

It is evident then from all the research that I pour over that achieving rapid charge/discharge capabilities for a battery system is indeed a major challenge, and will be for some time; as is energy density. While some battery research concentrate on ionic fluids, other concentrate on nano-scale materials to attain higher energy density. So, any solution must fit the requirements for hybrid electric vehicle applications, and it must be durable.

For sure, this is definitely a growth industry that needs as much disruptive technologies as it can get, especially as stop-start systems increase in numbers. And right now, 80 percent of start-stop vehicles use an AGM battery by Johnson Controls; but there is one new, competing battery technology about to enter the fray.

With all respect to JCI, Seeking Alpha also says a recent research report by Pacific Crest alleges the AGM system can suffer the effects of sulfation, whereby the batteries can lose half their charge after only two months of driving.

Yet, there is another side to this argument. All you have to do is read all the comments below the feature article by Seeking Alpha. Yet, I do not care where sulfation occurs at the positive electrode or the negative, but any new electrode that solves the charge/discharge rate problem, which is affected by sulfation, has my vote.

Frankly, I do not intend to take sides here with the debate, as I have far better things to do. I opt for the truth based on actual test data. The fact that Axion Power is aligned with BMW and Norfolk Southern who obviously test extensively adds a lot of credibility, in my mind.

From an investor standpoint, it’s even more important to note that Axion doesn’t have to compete with JCI or Exide, as it merely has a better electrode which can make their AGM systems even better. So, this is not an “us vs. them” scenario as much as web comments try to make it. In essence, Axion fits the old scenario of selling picks and shovels to the gold miners; in this case, making electrodes for the battery makers.

In Axion’s Own Words

What really caught my techie head both then and now was the description of the PbC® battery as a hybrid device that uses the standard lead acid battery positive electrode and a supercapacitor negative electrode that is made of activated carbon. Note the term, “super capacitor electrode“, because that is unique when compared to all the battery systems I have ever used.

For the record, conventional lead acid batteries vary the concentration of acid from very concentrated in the charged state to somewhat dilute in the discharged state as the acid is converted to water. In contrast, the PbC® battery manages that condition differently. For example, Axion says it stores H+ in the negative electrode in the fully-charged state which later moves to the positive electrode during discharge where they are neutralized to form water.

More than seven years have been devoted to research and development on various aspects of this technology. Even the testing has been unique in that the Axion test protocol requires a complete charge-discharge cycle every 7 hours to a 100% depth of discharge. During testing, their laboratory prototypes have withstood more than 2,000 cycles before failure.

By comparison, most lead-acid batteries designed for deep discharge applications can only survive 300 to 500 cycles under these operating conditions. That makes Axion’s technology approach 300% longer life.

Now, does that answer address this sulfation detail debate fully? Probably not, but the tests do show that battery technology is advancing to meet the demands of the electrification, whether full or light, for the automobile. And that’s good for the auto industry and for the consumers who, considering the economic times, need cheaper technologies to do the same amount of work.

Full Disclosure: At time of publication, Sherosky, creator of the auto sector charts for TN, has a long position in this stock as part of his long-term retirement account. While that can change at any time, none of the information in this article constitutes a recommendation, but an assessment or opinion.

Toyota's First EV Will Have a Name of BZ: Toyota BZ
First Videos From Inside The Boring Company's Las Vegas Loop
END_OF_DOCUMENT_TOKEN_TO_BE_REPLACED