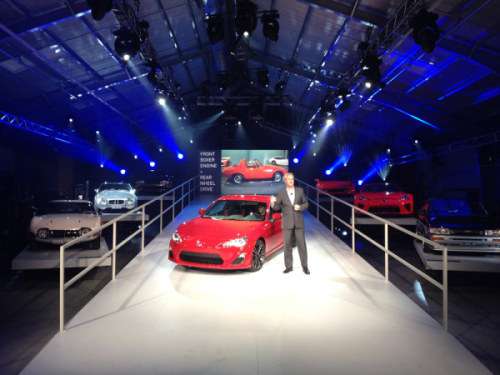 There was plenty of Facebook and Twitter chatter leading up to the reveal of the Scion FR-S production car at the 2011 Tokyo Auto Show, in what Hollis, VP of Scion described as the night Scion brought the SPORT back to the CAR.
Advertisement

Before the 2013 Scion FR-S production vehicle was revealed among the Toyota classics at the 2011 Tokyo Auto Show, Scion was surely busy gearing up and getting everyone excited for tonight’s FR-S event, where they would share their latest development with the world! Facebook noted you could follow @scion on Twitter, where the Scion team would be live tweeting throughout the show starting at 7pm PST!

While waiting, I checked an old news release on the Scion website, only to find a there was a reveal at the 2011 New York Auto Show. So, that led me to wonder how this reveal would be new, except that the concept was intended to give a heads up to an actual production model for what I assumed is 2012.

Unfortunately, there wasn't any live streaming video from the event, but there was supposed to be live updates and photos on the Scion Twitter account. Bad media management, in my opinion. Too much dependence on Twitter especially for a release.

For the record, Don Bain of TorqueNews covered the SR-S at the New York International Auto Show as far back as April. Read: Scion finally reveals the FR-S Sport coupe concept at NYIAS

The FR-S can trace its lineage back through cars like the Toyota 2000GT, MR-2, Celica All Trac Turbo, Supra Turbo and its first cousin, once removed, the AE86 Corolla, or hachi-roku (86) in Japanese.

Key to the design is the fact that the AE86 didn’t rely on pure horsepower, but rather on a combination of light weight, appropriate power and measured balance. It made its mark in almost every kind of racing from grip to drift, including mountain rallies.

The information released in New York indicated the FR-S has an innovative naturally-aspirated boxer engine incorporating Toyota’s D4-S injection system, which combines both direct and port injection for increased horsepower and torque throughout the tachometer range, without sacrificing fuel economy. The motor is coupled to either a six-speed manual or automatic transmission. Tonight, fans are wondering if that holds true.

As the latest tweet noted VP Jack Hollis was getting ready to take the stage to reveal the new #ScionFRS , I wondered how different might the body style be. After all, the concept vehicle in New York had shown quite the sculpture. Sometimes that works well, sometimes it can be overdone and appear gaudy. Having worked with designers at the GM studio in the past, I pay a lot more attention to body lines than when I was just designing parts.

Watching the tweets, I caught a few concerns like: Kinda hate that its gonna be called the Toyota GT-86 everywhere except in the US. Another wrote, Scion definitely knows how to launch cars with a bang.

Then another wrote, Why is everyone making a big deal about Scion FRS release? We know what it looks like, calm down.

And that was my sentiment. Unless it’s a restyle, what’s all the fuss?

The Scion FR-S is Officially Here

Then Jack Hollis finally chimed in with multiple quips that included the following, “The Scion iQ ushers in a New Urbanism for a progressive buyer. The next Scion is a machine that will be THE halo car for Scion. Tonight will go down in history as the night Scion brought the SPORT back to the CAR.”

According to Scion, the Scion FRS is heavily influenced by the 2000GT’s which is considered a timeless classic. In fact, the Scion FRS draws from the heritage of Toyota sports cars for its DNA!

Comparing the photos to the concept image on the Scion website, though, shows less heavy sculpture on the front end. See the attached gallery below the main image.