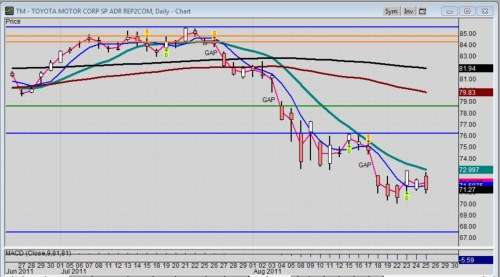 While the hope of the nation rests in the decisions or indecisions of the Fed at Jackson Hole, Wyoming, so does the hopes and dreams of auto sector investors that the 2012 Toyota Camry will help Toyota stock get its mojo back and retrace three major price gaps in its recent trading.
Advertisement

You don’t have to go back very far in time to see the price dynamics and the technical story for the gap scenarios on Toyota stock. While the public was getting teased by Toyota with partial photos of the 2102 Toyota Camry, the market bears were having their way with the stock along with the entire auto sector.

From where the stock closed today, the lower edge of the gaps were as follows: 72.47; 77.39 and 83.39. The 72.47 gap was partially closed Tuesday with a big bull day, a green candlestick on the chart. However, it failed yesterday and again with today’s close of 71.26 and a lower high than Tuesday's bullish bar, a bearish tone.

For the education of readers who may not be familiar with the price-gap term, a price gap is a technical condition on a stock’s price-time chart where there is a break in price, up or down, that creates a gap that traders never filled any trades. In technical analysis this is known literally as a price gap, and is a significant event.

Also, for the record, all stock charts read left to right, with the past on the left and the nearest date on the right. The time scale is on the bottom. On the vertical scale to the right are the prices rising from bottom to top.

According to the earliest records and books on technical analysis, legendary trader, W.D. Gann, wrote about price gaps. And many others since then wrote about them, even mentioning how the market abhors a vacuum, a price vacuum in this case. It is fully expected by those who believe in technical analysis over fundamental analysis that prices will rise or fall to fill that gap. When it fails, that too is significant.

Failure to fill a gap implies the market’s trend bias is so strong that the normal fill-the-gap event is delayed. In the case of Toyota stock, that is precisely the condition we have today, where even a major news event like the unveiling of he 2012 Toyota Camry can only muster a feeble attempt to fill the last gap.

Recall that I wrote a few articles past that the next level of major price support is 67.56 for Toyota stock, the low of September 2, 2010. That, for the record, still stands.

What’s next for Toyota stock?

So keep your eyes and ears tuned to Bernanke and company in Jackson Hole, but also how the market reacts to any news. Point: His speech tomorrow, regardless of any directions, decisions or indecisions, will affect the psyche of the general market.

Will Toyota stock be affected? Well, it has so far by the general malaise and bearish trend bias. And whether the 2012 Toyota Camry will be a hit seems immaterial at this point. Fact is, it is not the root cause for the stock rising or falling, unless you can predict future sales will jump off the charts; and that remains to be seen, too.

One thing for sure, though, no stock will rise and stay risen just on the news of a single car launch. I may jump fr a day or two, but not much beyond that. It takes conviction by the general market which creates a trend bias.

Once again it’s all about the economy getting healthy first; then the sales will come which will spur the stock traders to help Toyota stock fill all those price gaps. Just remember that all gaps on the way down are looked upon by traders as levels of potential upside resistance or selling pressure, as many traders take profit from their buying at these lower levels; that is, if they had the stomach for it.