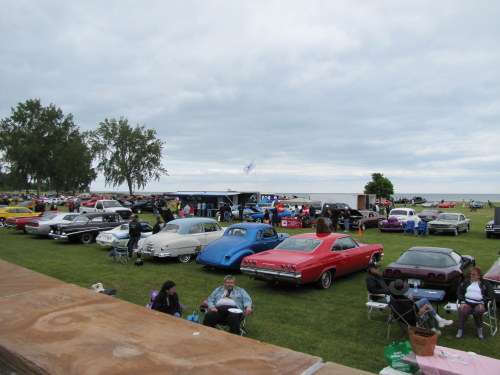 Metro Beach on Lake St. Clair northeast of Detroit was the place to be today. The combination of cooler weather delayed the appearance of fish flies, but not the beach atmosphere, nor the hot rods and a fine crowd of people which made for a great day as the video and slideshow will tell.
Advertisement

The season for outdoor car shows in the metro-Detroit area is officially on the way. Sure, the big cruises like the Gratiot Cruise, the Woodward Dream Cruise and the Harper Charity Cruise will pull in the giant crowds from all over. However, these local shows pull in great crowds with plenty of enthusiasm for the craft of customizing and restoring automobiles.

For the record, members of four local car clubs displayed plenty of rides, including antique, classic and muscle cars, along with street rods and low riders.

Also for the record, there were two special interviews at the show I want to mention. The first was Jenny and Steve Rudnik who were handing out fliers for the upcoming, Knights of St. John Charity Car Show to benefit MDA and other charities. Their show will occur on Saturday, August 27, 2011 at Sterling Lanes near 14 Mile Road and Schoenherr Road.

All in all, the show would have been a success rain or shine, but the fact the fish flies were gone made it even better. The show promoters may want to reschedule away from fish fly season. I recall car owners struggling to keep the little critters off the cars and entering upholstery last year.

My coverage this time is different than in the past, in that I did not have the good company of my wife, Judi. I sure did miss her help with the camera for video setups.

Still, I made the best of it and took my time looking for special shots. That is why I opted to change the format this time around. Rather than segregating photos from the videos, I opted to include them into a single format, a video with a combination of sub-videos mixed in with small groupings of still photos. Granted, it’s a little longer, but the flow seems better, at least in my punkin’ head. Next time I’ll try to add music to the still photos. Hope you like it.

The next show for me? Try the EyesOn Design on the grounds of the Edsel and Eleanor Ford Mansion. So, stay tuned to Torque News!