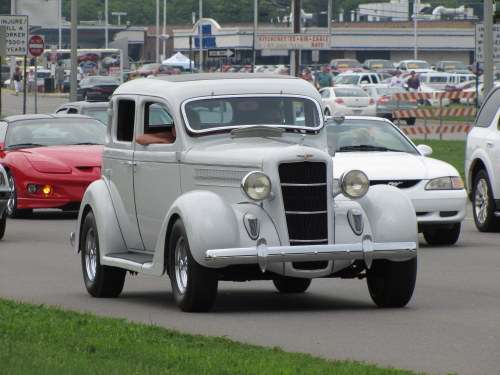 The 2011 Gratiot Cruise in Clinton Township, Michigan is just not complete until someone like Torque News goes beyond still photos and captures the sights and sounds of summer cruising with custom and restored cars on video.
Advertisement

Among the three major cruises of the Metro-Detroit summer season, the Gratiot Cruise leads off on the first Sunday in August. In two weeks will be the Woodward Dream Cruise (Aug 20) and then the Harper Charity Cruise (Aug 31). I personally call these the Big-3 of all the local cruises.

This 2011 cruise season actually marks my first cruise coverage for Torque News. Good part is, my coverage is now national, where past years were mostly local.

Again, I see the Gratiot Cruise improving with every year. So, I again congratulate the organizers, especially adding greater features for the crowd on the west side of the Gratiot boulevard at 15 Mile Road. Special thanks to Dorian Ford.

Quite a few vehicles really caught my eye. However, my favorite was the custom body on a Corvette chassis. It looked like an older Vette but with a mid-1950s grille and a tail light design that looked like 1953; all with the lower modern profile and stance. It gave a modern vision to retro.

For Larry Weinert, my long-time and favorite brother-in-law, there's a Plymouth Prowler with a mini-trailer for your buddy in England who said he never saw one before. I searched for a '46 Merc but came up short once again.

Since I’ve published the pics in a separate article (Read 2011 Gratiot Cruise revs up the summer ), now it’s time for videos. Good news is, Google has bumped my video time to over 15 minute segments. I didn’t request it; they just gave it to me. So, I placed the first as a 13-minute segment, followed by a similar 13-minute segment.

The first video starts slow (hey, I was rusty rom traveling), but picks up steam. So, for those who couldn’t be there, enjoy! And be sure to share with your friends around the country.

Remember, after the 2011 Gratiot Cruise comes the 2011 Woodward Dream Cruise. After that, I will cover the 2011 Harper Charity Cruise.

-----------------------
About the Reporter: After 39 years in the auto industry as a design engineer, Frank Sherosky now trades stocks, futures and writes articles, books and ebooks like, "Perfecting Corporate Character," "Awaken Your Speculator Mind", and "Millennial World Order" via authorfrank.com. He may be contacted here by email: Fr[email protected]