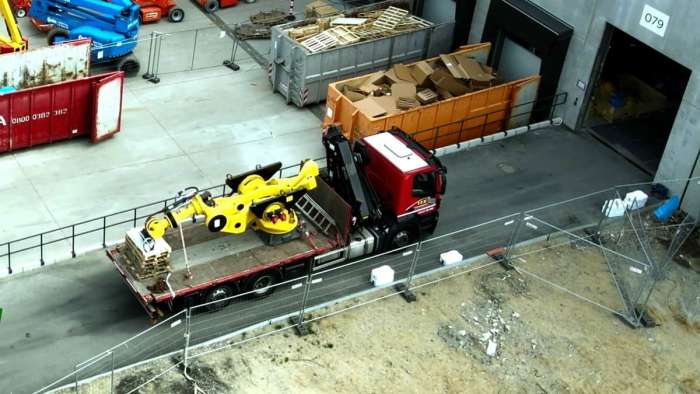 A new Tesla Giga Berlin drone flyover suggests, that Tesla has begun taking deliveries of robots that will be used to produce 4680 battery packs. The new battery pack will power the refreshed Model Y with 4680 cells and a structural battery pack.
Advertisement

When Model Y production started in Giga Berlin, the vehicle coming out of the new plant was expected to be a refreshed variant of the all-electric crossover with 4680 cells and a structural battery pack.

However, Tesla has been facing difficulties ramping up 4680 cell production with high throughput. According to some estimates, as of last month, Tesla only had enough 4680 cells to produce a little over 1000 vehicles.

This is after more than a year of 4680 cell production at the company’s Keto Road facility which was expected to produce 10GWh of the newest cells in a year. If the Keto Road production had reached the 10GWh number, Tesla would’ve had enough cells to produce more than 100,000 Model Ys.

However, due to the cell constraints, Tesla has been forced to begin Model Y production at Giga Berlin with the last generation 2170 cells. According to Tesla’s Battery Day presentation, the 4680 cells, in addition with the structural battery pack, are expected to improve range by as much as 54%.

Recently, we learned that Giga Texas produced Model Y with the 4680 cells is significantly more efficient than the 2170 Model Y’s produced in Giga Berlin, Fremont, and Giga Shanghai. The Giga Texas Model Y gets 279 mile EPA range from a small 50KWh battery pack.

This number shows how important transitioning to 4680 cells is for Tesla. And today, we got some good news suggesting Tesla is preparing to start 4680 Model Y production at Giga Berlin.

The information comes via Wolfpack Berlin - Robert & Andreas Twitter channel which spotted a new robot getting delivered to the factory. According to Tesla enthusiast Alex Voigt, the new robot appears to be a “FANUC M-2000iA/1200 articulated robot, the same model as the one Tesla uses at Giga Texas on the 4680 Structural Pack manufacturing line.”

That appears to be a FANUC M-2000iA/1200 articulated robot, the same model as the one @Tesla uses at Giga Texas on the 4680 Structural Pack manufacturing line.https://t.co/Al2AG9w1yR

This is in line with Elon Musk's prior announcement that Giga Berlin will transition to 4680 cells later this year. The news is definitely exciting but individuals waiting for a longer-range and better-performance Model Y will be disappointed.

Having said that, there is a good chance the refreshed Model Y, although only has a 50KWh battery pack that the vehicle actually ships with a 68KWh battery and that Tesla has software capped it at the current level.

Although we have our first reports of 4680 structural pack manufacturing equipment getting delivered to Giga Berlin, it’s still difficult to say exactly when Tesla will begin refreshed Model Y production at the plant.

However, we will be sure to keep you posted as we learn more about Tesla’s plans. Until then, make sure to visit our site torquenews.com/Tesla regularly for the latest updates.

So what do you think? Excited to see Tesla is getting closer to building the refreshed Model Y at Giga Berlin? Also, would you delay your order to get a Model Y with the newest batteries? Let me know your thoughts in the comments below.

For more information check out: Tesla Announces 3 to 1 Stock Split!