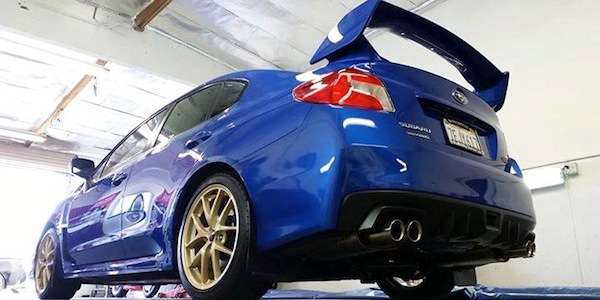 The 2015 Subaru WRX STI comes in many colors, but one is outselling all the others by a wide margin. Why is this one color the hot seller?
Advertisement

Subaru has a rich history in the World Rally Championship and it shows up in the color composition ratio for the 2015 WRX STI. Subaru is selling many more WR Blue Pearl performance sedans than the other 5 colors. Subaru also offers the sports car in Crystal White Pearl, Crystal Black Silica, Ice Silver Metallic, Dark Grey Metallic and Lightning Red. Why is WR Blue Pearl so popular?

The WR Blue Pearl WRX STI performance car pays tribute to its racing heritage that helped develop the car into what it is today. The Subaru WRX STI has a rich racing history in the World Rally Championship (WRC) and all the cars are painted this iconic color. The Subaru WRX STI has deep roots in the WRC as it’s been the perfect testing ground for the performance car. Rally racing is one of the most demanding motorsports on the planet and Subaru has developed the WRX STI on the most challenging rally courses in the world. Buyers relate to this heritage and identify the car with WRC.

Buyers of the WRX are much different and it shows in the colors they pick. WRX is also offered in the exact same color options, but WRX buyers choose a very different color composition ratio. Here are the colors and percentages for 2015 WRX. Crystal White Pearl (28 percent), Ice Silver Metallic (24 percent), WR Blue Pearl (18 percent), Crystal Black Silica (17 percent), Dark Grey Metallic (9 percent) and Lightning Red (4 percent). White and Silver are the top colors and WR Blue is just ahead of Black for WRX.

You will see many more WR Blue Pearl 2015 Subaru WRX STIs on the road than any other color. It’s because of Subaru’s rich WRC history and STI buyers identify the car with it. You will see more white and silver 2015 WRX performance cars on the road and it shows that these buyers are much different than STI buyers.