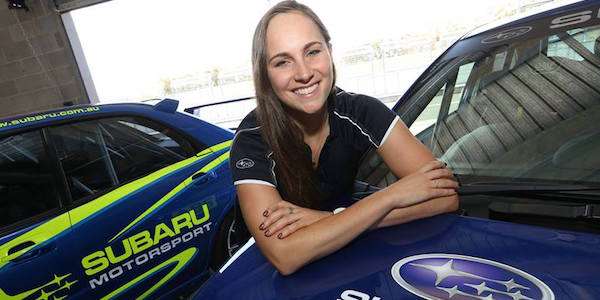 The new 2016 Subaru WRX STI rally car undergoes testing in Australia. How is Molly’s time behind the wheel going?
Advertisement

The Subaru brand’s factory-backed rally return is coming soon and Molly Taylor has been trying out the brand new 2016 Subaru WRX STI. Subaru returns to domestic rallying after an 11-year absence. The return in the WRX STI will take place in the Kumho Tyre Australian Rally Championship.

Molly Taylor is behind the wheel along with co-driver Bill Hayes who have completed more than 250 kilometers of testing on the abrasive gravel roads outside Launceston, Tasmania. Subaru do Motorsport reports that the 2016 WRX STI prepared by Les Walkden Rallying (LWR), is running faultlessly.

The first rally race is next weekend

Molly says she’s ready and feels comfortable in the new STI rally machine. “I felt comfortable in the car and our preparation is going very much in the right direction, as it ran faultlessly for two days.” LWR Team Principal, Les Walkden, said, “We’ve tested all the basics, from brake to suspension settings and our primary objective in WA is to finish that first event and apply the lessons learned.”

The Australian rally consists of five rounds that run April through November 2016. David Potter who is the chassis tech, and Arto Lehtonen the engine guru, have been assisting with prep of the new WRX STI rally car. Les added: “We’re taking a conservative approach, it’s a long season of rallying and the idea is that we accumulate a lot of knowledge and steadily build on that.”

Molly Taylor will pilot the new 2016 Subaru do Motorsport WRX STI in round 1 at the Quit Forest Rally in Western Australia next weekend (April 22-24). Stay tuned.