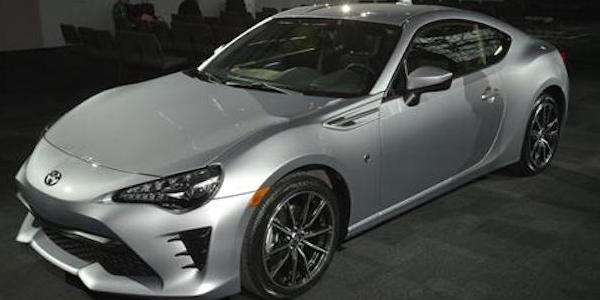 The 2017 Toyota 86 replaces the outgoing Scion FR-S and gets suspension and power upgrades. Will it make much difference?
Advertisement

It gets a new Toyota badge, and the new Toyota 86 gets refreshed but not a complete overhaul for 2017. The new 2017 Toyota 86 made its global debut at the New York International Auto Show this week. It gets new exterior styling, changes to the interior, and also suspension and engine upgrades.

Toyota and Subaru tweaked the 2.0-liter boxer engine and squeezed out an additional 5hp and another 5 lb. ft of torque from the naturally aspirated engine. Suspension tweaks were also made on the 2017 Toyota 86 with the shocks re-tuned and it gets a spring rate change that Toyota says will enhance control of the sports coupe. On the 6-speed manual coupes, performance is improved through a gear ratio change. Is it enough for performance enthusiasts?

The 2016 Scion FR-S and BRZ rear-drive sport coupes were high on the fun-to-drive meter before, and the changes in power and suspension should ramp it up even more. A 5hp bump doesn’t sound like much, but when it’s combined with more torque and suspension tweaks, it will make a difference in overall driving performance.

The Toyota 86 needed to be updated and it gets enough performance upgrades to keep it interesting for driving enthusiasts. It probably won’t satisfy performance fans who wanted a turbocharged BRZ/86 model for 2017. Subaru and Toyota won’t likely be putting a turbocharged engine in the sports coupe anytime soon.

In a recent interview, Subaru COO Tom Doll said, “I think there is a place in our lineup for the BRZ. We will have to do some things to it to enhance the driving performance a little bit more, take it up a little bit. We have learned that if it had a little bit more performance to it, BRZ could increase in sales even more.”

It looks like Subaru will make similar power and suspension changes to the 2017 BRZ when it’s announced. Don’t expect performance upgrades beyond what the Toyota 86 received. The new Toyota 86 will arrive in showrooms this fall with pricing being announced closer to dealer launch.

Photo used with permission from Newspress

John Goreham wrote on March 25, 2016 - 11:48am Permalink
If the torque is added between 1200 and 3000 RPMs it will be most welcome. If the HP and torque are at the top end it won't make much, if any difference. My $ 0.02.
Mick Maas wrote on March 26, 2016 - 4:39am Permalink
It's a great fun car, they have just improved the looks and inside which I really like, I'm seriously considering trading my XT Forester on one.
Phil Bickel wrote on March 27, 2016 - 1:29pm Permalink
I think most people commenting and writing reviews really don't understand what Toyota and Subaru are doing with this car.
karking wrote on May 24, 2016 - 1:50pm Permalink
They are making money. As for the tuner aftermarket, good luck with warranty claims. If your pockets are deep enough to shell out the asking price for one of these toys, and then add tuner parts and bolt ons, why not just buy a base Cayman and be done with it? Also, the retained basic body is a cop-out. It already looks dated. As for legendary reliability, forget it. Built to break. Hard driving the "excuse" from Toyo-Ru.
Phil Bickel wrote on May 24, 2016 - 7:50pm Permalink
Yes, we're making money! Is that a sin? You want to buy a Toyota at cost, buy a Camry. As for reliability, I bought my 87 Supra in 1997, miled it up, (186k ) sold it in 2009 for more than I paid for it. Only repair was a $6.00 by pass hose. Who else matches Toyotas reliability? Lexus! Porsche, seriously? Whats that worth at 90k? $10,000 maybe?
Nicole wrote on October 12, 2016 - 9:52pm Permalink
Tell that to the pockets dishing out hundreds of thousands of dollars across the United States for EVERY FR-S in a shop under warrenty right now for blowing a barring. Improvements AND toyota seal are very welcome!!!!