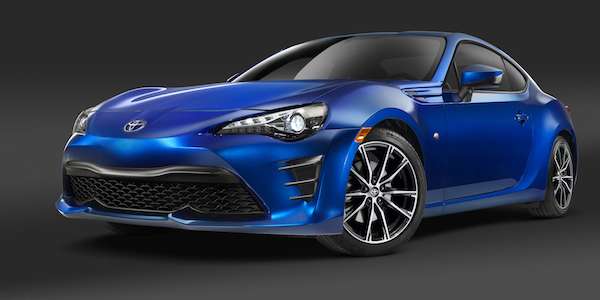 Scion FR-S Is Dead It Lives As Toyota 86

Meet the Scion FR-S successor, the new 2017 Toyota 86. What changes are coming for 2017?
Advertisement

The Scion FR-S is dead, but it lives on as the 2017 Toyota 86. The 86 keeps its global name and it’s shortened from GT86 it has in other global markets. It’s coming this fall with new upgrades to the exterior, interior, suspension and engine. It’s the successor to the Scion FR-S with the Scion brand being axed by Toyota after the 2016 model year. It’s still related to the Subaru BRZ, but gets a minor refresh and a name change. What’s different on the new 2017 Toyota 86?

Besides the obvious new Toyota badges, the new 86 comes with minor changes and not a complete overhaul for 2017. It gets interior and exterior changes, as well as suspension and powertrain upgrades. Here’s what you can expect to see on the 2017 Toyota 86 when it arrives this fall.

On the outside, the rear-drive sports car doesn’t get a complete restyling, but gets a few tweaks with a larger center intake, re-configured LED front headlamps and turn signals and a revised bumper. The rear also gets revised with LED tail lamps and a new bumper design. New alloy wheels feature a twisted spoke design and 86 logos have been incorporated into a badge on the front fender, as well as inside the front headlamps.

The interior also gets a mild refresh and will feature the 86 logo on the new “Grandlux” material used on the instrument panel surround. This material is also seen on the door trim. New material on the seats gets silver stitching, and the steering wheel comes with integrated audio controls and an 86 logo on the center hub.

The Subaru Boxer engine carries over from FR-S, but won’t be turbocharged. It does get a 5hp bump to 205hp, and torque increases from 151 lb. ft to 156 lb.ft of torque. Toyota says the shock tuning has been revised and it gets a spring rate change that will enhance control of the sports coupe. On the 6-speed manual coupes, performance is improved through a gear ratio change. It also comes with a Hill Start Assist Control (HAC) preventing the car from rolling back on steep hills.

The Toyota 86 gets a mild refresh for 2017 over the outgoing 2016 Scion FR-S. With the engine and suspension improvements, it should ramp up the fun-to-drive meter. The rear-drive sports coupe will make its debut at the New York International Auto Show next week. The new Toyota 86 will arrive in showrooms this fall with pricing being announced closer to dealer launch. The Scion FR-S is dead, but it lives on as the Toyota 86.