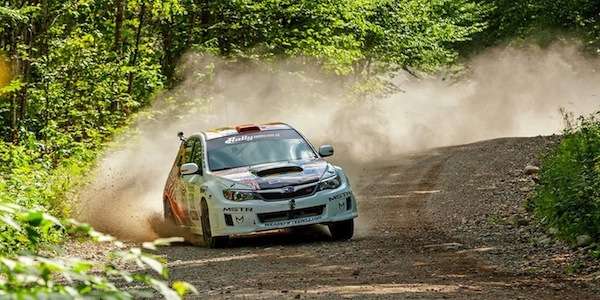 Why is Subaru WRX STI the car of choice for top rally racing privateers?

The rally-bred 2015 Subaru WRX STI has a long history of motorsport success and is why privateers use its predecessors.
Advertisement

Subaru's WRX STI SRT USA team of David Higgins and Craig Drew is the duo we hear about the most when it comes to rally racing, but Subaru is the car of choice for top privateers. The performance cars are heavily used in Rally America and Canadian Rally Championship events in North America. Where did the Subaru motorsport story start?

Subaru has a long history with rally racing that started in 1990 with a Subaru Legacy sedan. The mud-flinging Safari Rally in Kenya proved a fitting test for Subaru durability and AWD traction and the Subaru racing story had begun. In 1993, the STI-tuned Impreza rally car arrived and was unleashed on the WRC in Finland at the Rally 1000 Lakes. Smaller, lighter and more nimble, it took second place in its first event. 46 victories would follow.

In 2001, the “Bug-eye” Impreza WRX races onto the WRC scene and the WRX STI followed in 2004. The WRX STI is rally-bred and Subaru and STI learned what it took to build a winner on and off the rally course and it’s why the performance car is the number one choice for top privateers in North America. This past season there were 6 privateers who chose to run the Subaru WRX STI and 2 who run the Subaru Impreza in the Rally America Championship.

Five Subaru vehicles placed in the top 10 in Canada

Five Subaru vehicles placed in the top 10 at the final round of the Canadian Rally Championship (CRC), Rally of the Tall Pines, which was held November 28-29, 2014 in Bancroft, ON. Subaru Rally Team Canada driver Martin Rowe and co-driver Nathalie Richard, came away with second-place acknowledgements in their respective seating positions in the completely new 2015 Subaru WRX STI.

Other notable Rally of the Tall Pines finishers

Privateers have done well this year in the rally-bred Subaru WRX STI and Impreza vehicles. Subaru is their brand of choice because the cars perform well without much modification with their rally-tuned suspension, Subaru’s Symmetrical AWD and a Subaru boxer engine that sits low in the chassis for optimal weight balance in the corners. Stay tuned for the 2015 Rally America season that will feature the new 2015 Subaru WRX STI rally car that’s being prepared now by Vermont SportsCar.

Mike wrote on December 20, 2014 - 11:51am Permalink
The first car subaru used in world rally was the Leone RX introduced late in the 1986 season for group A.