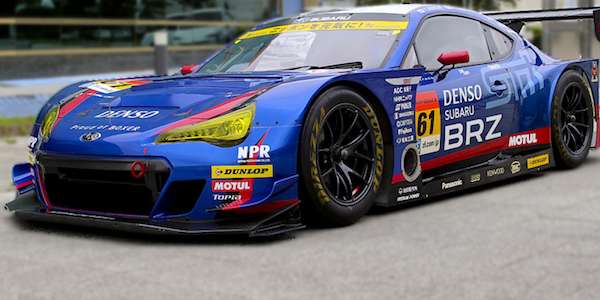 The Subaru BRZ GT300 gets new upgrades to match the 2017 BRZ production car. Can you tell what they are?
Advertisement

Subaru Motorsports is all about winning races, but they are also about promoting the brand around the globe. When Subaru races their BRZ sports coupe or WRX STI performance sedan, they want fans to immediately recognize the cars as the same cars they drive on the streets or even drove to the track. It’s all about brand recognition and it works.

Subaru’s BRZ GT300 race car competes in Japan’s SUPER GT Series, widely regarded as the countries top motorsports category. It not only needs to be fast, it also has to look good doing it. The BRZ GT300 can’t be left with the old styling. The race version gets exterior changes that now match the newly-upgraded 2017 BRZ production car. It received new LED headlights and taillights for the new model year. BRZ GT300 receives the same new treatments.

The newly-refreshed 2017 Subaru BRZ sports coupe’s signature C-shaped headlights have been upgraded to “kono-ji” style LED lamps. Subaru says it will improve light output and reduce power consumption. The new full-LED design is a first for Subaru, and it incorporates the turn signal and position light. Also new for 2017, Daytime Running Lights (DRL) have been integrated into the production BRZ headlights and are standard equipment on all trims.

The BRZ GT300 also gets new upgrades to the front and rear facia. This is not for appearance purposes, but for improved performance. A new louver on the lip of the hood and trunk lid was allowed by rule changes. This will help improve heat dissipation from the front and rear tires of the race car. Subaru Tecnica International (STI) is hoping for better results this weekend.

The #61 Subaru BRZ GT300 race gets new upgrades to match the 2017 BRZ production car. The BRZ GT300 will sport these new changes in the upcoming fourth round of the SUPER GT Series this weekend. The 300km race will be held at SUGO Sportsland July 23-24. Stay tuned for race results.