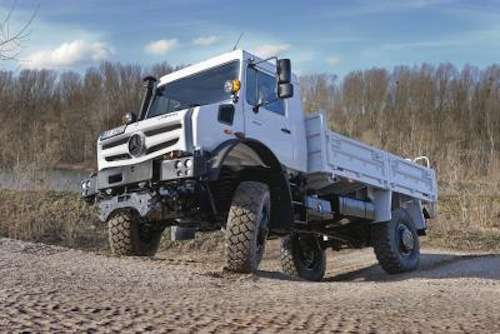 2013 Mercedes-Benz Unimog is a beast when it comes to off-road machines and takes first place as the “best off-road vehicle of the year.”
Advertisement

It seems like a no-brainer that the new 2013 Mercedes-Benz Unimog would be voted the best off-road vehicle of the year by readers of the "Off Road" trade magazine. Just one look at the extreme vehicle would suggest that this vehicle could go anywhere on the planet. It’s a very special vehicle and the Unimog came in first with an outstanding 31.1 percent of reader’s votes. The massive off-road machine won the voting in the category for "Special vehicles."

And it’s no surprise that the Mercedes-Benz Unimog has won the award for the ninth time running. It wasn’t like the readers only had a few choices in the voting.
The vote for the "Off-road vehicle of the year 2013" covered thirteen categories with off-road vehicles from 53 manufacturers. Over 74,000 votes were submitted for 125 vehicles. The Mercedes Unimog has been around since dirt was invented and the name Unimog stands for the acronym “UNIversal MOtor Gerat” Garat is the German word for machine.

2013 Unimog has undergone a complete redesign

Daimler Benz took over manufacturing of the Unimog in 1951 and they are currently built in the Mercedes truck plant in Worth am Rhein in Germany by Mercedes-Benz. After a ten-year production period, Mercedes thought the model series needed an update. The new 2013 Unimog has undergone a complete redesign and has been equipped for the future thanks to Euro VI. It features a completely redesigned interior and exterior.

The cab of the Unimog extreme off-roader has defined the Unimog since 1974 and has an unmistakable look. Starting in June, 2006 the UGN series is produced with "BlueTec" technology so that the future exhaust limit Euro IV requirements could be met. The Mercedes engineers were tasked with fitting the Euro VI technology beneath this cab. The engine needed to be fitted one meter further back below the cab, and the length of the new cab was increased by 120 millimeters and slightly raised.

Other improvements to the new-generation Unimog includes a new "Tirecontrol Plus" tire pressure control system that can now be selected simply and conveniently in the display with the help of the "Road", "Sand" and "Rough road" programs. On the exterior, it gets a newly designed radiator grille and new bumper with modern lights. The frame was also dropped to incorporate the new engine position which lowers the center of gravity and helps improve driving characteristics during off-road operation.

The new larger windshield was also redesigned for a clearer view out of the new redesigned clear-view cab. It features completely new instrument panel, new systems for the working and power hydraulics as well as the synergetic traction drive which allows the driver to switch between manual transmission and hydrostatic drive whilst driving.

Unimogs have been uncommon in North America because of vehicle regulations and requirements that are much different in the U.S. than those in Germany. Due to the lack of a North American sales and support network, most Unimog models found in the U.S. have been imported by individual dealers or independent enthusiasts. The newly redesigned 2013 Mercedes-Benz Unimog is certainly deserving of the "Off-road vehicle of the year 2013 Special vehicles” award. The extreme off-roader looks like it can go anywhere the driver points it.