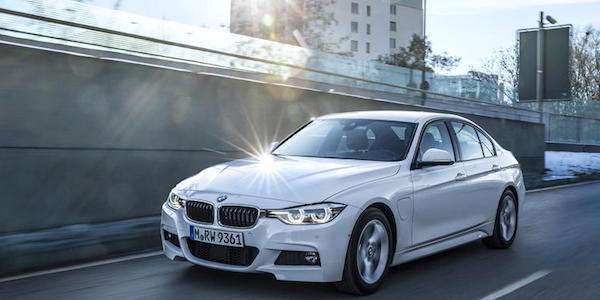 Why BMW 330e iPerformance Won’t Set the World on Fire

The new BMW 330e iPerformance plug-in hybrid sedan is here and it's got performance and efficiency in one package. BMW is moving more toward electrification and we see it with the i8 performance sports car and we’ll see more from the Bavarian automaker in the future. Some think it’s going to put an end to all the fun, but BMW won’t let that happen.

Now BMW brings out the 330e iPerformance, the clean version of the 3 Series sedan. It’s powered by a plug-in hybrid powertrain that includes a turbo 2.0-liter four-cylinder, same engine as the 320i, coupled with an electric motor that puts out 87 horsepower and 184 lb.-ft. of torque all by itself. It's still going to be a fun 3 Series sedan to drive.

Total system output is 248 horsepower and 310 lb.-ft. of torque. Rear-wheel drive and an 8-speed automatic transmission are standard. BMW says it will sprint form 0-60 mph in 5.9 seconds with a top speed of 140 mph. The new 330e iPerformance will be fun-to-drive and driver engagement will be high. For emissions free driving, pure-electric driving is possible at speeds of up to 75 mph and with a range of around 14 miles. Will consumers pay the price for a few miles of all-electric driving?

It’s about the competition

Of course it’s BMWs answer to the Tesla Model 3. Tesla’s Model 3 is aimed squarely at people who would buy a BMW 3 Series, Audi A4 and Mercedes-Benz C-Class. Will the new 330e iPerformance excite consumers? It’s a way for environmentally conscious consumers to power around in emissions free operation. But only for 14 miles in city traffic and running short errands. Once you hit the gas, the fuel-mileage benefits drop considerably.

Photo used with permission from BMW