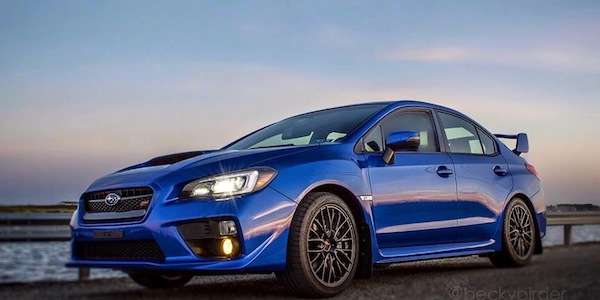 Why 2016 Subaru WRX STI leads all models in the stable

The 2016 Subaru WRX STI is the top model in Subaru’s lineup for the highest percentage of increase in sales for 2015. Why is the STI so popular?
Advertisement

Subaru’s 2016 Forester, Outback, Crosstrek, Impreza and WRX/STI all achieved their best October ever and sales at Subaru of America are booming. The Impreza posted a 69.3 percent increase, while the WRX/STI posted a 44.5 percent sales increase in October. It’s the 2016 Subaru WRX and WRX STI performance sedans that are leading the entire lineup in percentage of sales increase for the year. Why is the performance sedan so hot?

The rally-bred Subaru WRX/STI is an icon with performance fans and it continues to be a hot seller for Subaru around the globe. It’s particularly hot here in the U.S. and Canada since Fuji Heavy Industries, maker of Subaru vehicles launched the WRX in 2002 in North America. There’s a huge fan base in the Northeast, Mountain States and Pacific Northwest regions.

The compact WRX/STI cars deliver significant performance for the dollar and delivers more driver engagement than many higher-priced high-performance vehicles. Subaru Tecnica International, Subaru’s motorsport division developed the WRX/STI on the rally stages and Subaru brought the technology to a series production vehicle that continues to evolve today. There isn’t a car for the money, that is higher on the fun-to-drive meter, than the 2016 WRX STI. The WRX starts at $26,595, the STI has an MSRP of $34,695 plus destination.

Subaru’s boxer engine is a core value for the brand with it’s lower center of gravity is the power under the hood. WRX comes with a 268 hp 2.0-liter turbo boxer, 2016 WRX STI is powered by a 2.5-liter boxer producing 305 hp. The 2016 Subaru WRX and WRX STI received new upgrades for performance fans. The performance cars came with significant suspension upgrades for 2015 and for 2016, WRX/STI gets added safety and infotainment.

Subaru continues to develop the WRX/STI performance cars because one of their core values is building cars that are fun-to-drive. STI’s motorsport technology filters down to Subaru’s entire lineup and it’s one reason why Subaru continues to set new records every month with the WRX/STI. 28,164 new 2016 Subaru WRX/STI owners are enjoying every second of their commute this morning.