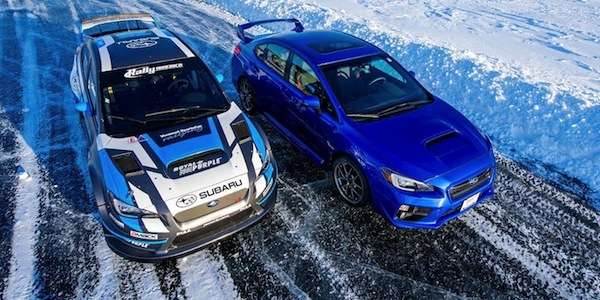 What would it take to turn your 2015 STI into a rally car?

The new 2015 Subaru WRX STI gets a photo shoot with the 2015 Subaru STI rally car. What would it take to turn your 2015 STI into a rally car?
Advertisement

Two special cars ventured onto the ice at Lake Champlain in Northern Vermont recently for an exclusive photo shoot. The SRT USA #75 prepared by Vermont SportsCar with the new generation 2015 Subaru WRX STI prepared by Fuji Heavy Industries in Japan. What did it take the team at Vermont SportsCar to transform the new WRX STI into a rally car?

Vermont SportsCar has been working on the new STI rally car for a year now and its already got two wins under its belt this season. Here’s what goes into a championship rally car and all the modifications the team did to the stock WRX STI.

The rally car also comes with a Heated front wind shield and polycarbonate side and rear windows. It gets special PIAA HID driving lights housed in carbon fiber, hood and bumper mounted, light pods for night driving during the January/February rally races.

On the inside, the 2015 STI gets a full Rally America / FIA Open Class specification roll cage wrapped in a seam-welded shell. It gets RECARO SPA ProRacer seats with HANS (Head & Neck Restraint) and Sabelt harnesses. It also comes with a carbon fiber dashboard, carbon fiber door cards and carbon fiber co-driver footrest and GEMS digital driver and co-driver displays. Under the floor, it is fitted with FIA FT3.5 fuel cell, 75+ liters.

SRT USA and Vermont SportsCar have not revealed the total cost of transforming the 2015 Subaru WRX STI into the SRT USA #75, but it won’t come cheap. If you want to build a rally car, you can see it takes a major commitment to the sport to produce a winner. Next up is the Oregon Trail Rally April 24-26 in Portland, Oregon. Stay tuned.