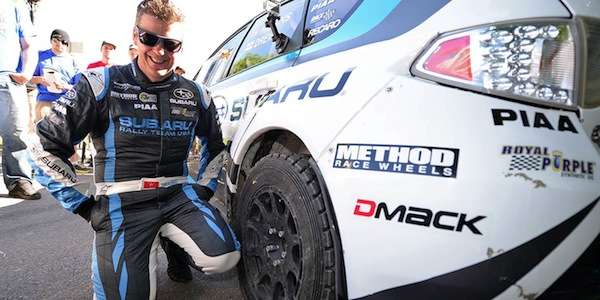 The wheel of choice for the 2015 WRX STI rally car is the Method MR502 VT-Spec. Method Race Wheels has been a sponsor and technical partner with SRT USA since 2013 and have helped the WRX STI Rally car win races. The Subaru race team uses the purpose-built wheels because they need rims that will withstand incredible abuse on the course.

The Method MR502 VT-Spec wheels have even helped David Higgins win a race. Last year at the 2014 Oregon Trail Rally, Higgins drove nearly 14 miles on a rim alone after the tire was shredded with confirmed speeds above 100mph going over multiple crest jumps, enabling him to complete the stage without stopping to change the tire and wheel. In an interview with SRT USA, Method Race Wheels Engineering Manager, Sean Kleinschuster says, “The wheel is now proudly displayed in our main conference room and is constantly generating conversations during meetings.”

Method Race Wheels takes their job of developing race wheels for SRT USA very seriously because it can mean the difference between winning a race and not finishing the race at all. Kleinschuster went on to say, “There is a near zero tolerance for part failure with pit options being so limited. If a wheel breaks that could very well put the team out of contention for a win which is unacceptable.”

Method spend countless hours with the SRT USA team to learn how to develop just the right wheel for the WRX STI rally car’s needs. When they joined the program, the wheel they developed was specifically tailored to the demanding needs of the most successful rally program in the U.S.

All the gravel wheels are pressure cast with A356.0-T6 aluminum. The process utilizes a mold into which molten aluminum is forced into a cavity that is the shape of the wheel with air pressure, rather than a casting which is filled simply by gravity pulling the material into the cavity. Method says this process improves the material properties and produces less scrap parts.

New wheels are lighter and stronger

Method says they will soon be releasing three different styles of street wheels based on those used by SRT USA to win multiple national championships. Because of these new stronger wheels developed for SRT USA, Higgins can push the 2015 WRX STI rally car even harder even if he has no tires on the rims.